WATCH: That’s A Hot One: WrestleMania 38 Sign Catches On Fire At Royal Rumble

Flame on? We are on the Road To WrestleMania and that road got started with the Royal Rumble. The show is one of the most important of the year as WWE needs to get things going on the way to the biggest event of the year. That means there are a lot of things in store, including a lot of Wrestlemania sign pointing. That is a little bit easier said than done though, and things did not go so well this time.

During the Becky Lynch vs. Doudrop match for the Raw Women’s Title, the WrestleMania 38 sign caught on fire and had to be lowered for repairs. Fans were moved away from the area but were ultimately moved back in later. The sign was then raised up later in the night, only to catch on fire again at the end of the show. Both incidents took place after the pyro around the sign went off following the Royal Rumble matches. There are no reported injuries from the night. Lynch also commented on the situation, saying she was so hot she melted the sign.

Pyro is MELTING the WrestleMania sign. They evacuated the section pic.twitter.com/fKcLW5vjuu

So hot I set the WrestleMania sign on fire. #RoyalRumble pic.twitter.com/U7Xzn9V6uM

This could have been bad. Check out what happened:

Opinion: This is one of those things that you do not see happen very often, but the most important point is that no one was hurt. That is the kind of thing that could have gotten a lot worse than it really was, but thankfully everyone is ok and can make fun of what happened. It’s something that is more embarrassing for WWE than anything else, but it could have been much more seriously bad.

What did you think of the sign catching on fire? What is your favorite similar mess? Let us know in the comments below. 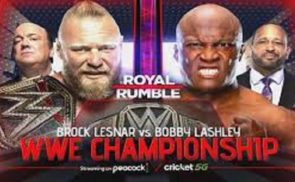