That’s kind of giving things away. Wrestling storylines can go all over the place at times, with one changing coming after another at the drop of a hat. That’s one of the things that makes it so much more interesting a lot of the time as you don’t quite know what you are going to get. Sometimes you get a little preview though and that might be what a local advertisement has given us.

This tells you a lot. Check out the local advertisement:

Opinion: This might not be the biggest surprise in the world but it does set up an interesting match. I’m not sure that WWE is willing to make Wyatt World Champion again but at the same time I can’t imagine them setting up a character for six months and then have him lose in his first title match. It makes for something interesting and that hasn’t been the case for a title match in quite some time.

Do you think Wyatt will get the match? How do you see it going? Let us know in the comments below. 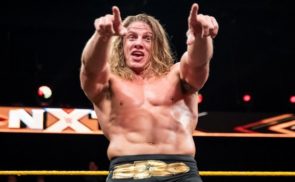