It has to be better. Video games and wrestling have gone together for decades now and it makes a lot of sense. It is a pretty easy concept to understand: fans like watching wrestlers and it would be even more fun to get to play as those characters in whatever matches they want. As a result, wrestling video games have been a big deal for over thirty years. Now they are getting a new version.

WWE has had a huge hand in wrestling video games for a very long time now, with all kinds of games out there. This includes everything from your traditional wrestling games to arcade games to racing games and various other points in between. They even have their own signature game from 2K studios, and now it is time to start seeing what they are up to next.

This could be great. Check out a trailer for WWE’s newest game:

WWE released a trailer for WWE2K22 during night one of WrestleMania 37. The clip shows a match between Rey Mysterio and Cesaro, featuring Mysterio hitting the 619. However, the clip is pre-rendered and does not suggest what the game will be capable of showing. There is no release date given for the game, which will be the first in this series of games since WWE2K20.

Opinion: WWE might be in for a little bit of a break as the WWE2K20 game was such a complete disaster that fans will take almost anything this time around. That is not a bad place to be in, though they do have to put something good together. Having an extra year to work out the bugs should help, but they need to step it up a notch anyway, which may not be the easiest trick. 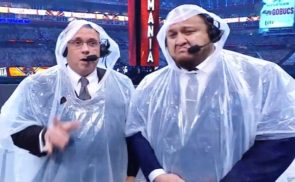