Welcome back. One of the coolest things in wrestling is a well done return. If you do not see a return coming, it can be up there with the most surprising and awesome things that a wrestling company can do. Sometimes it can be done to set something up in the near future and that was the case this time around. Just to make it even better, there was a bus involved.

This week’s AEW Dynamite featured the return of Cody Rhodes, who attacked QT Marshall following a six man tag. Marshall had scored the pin in the match but ran to the bus that he rode into the arena on to escape a post match brawl. Rhodes was inside of the bus and attacked Marshall, including putting him in the Figure Four on the roof. Marshall had put Rhodes out of action for four weeks, following an attack on March 31. A match between the two was announced for the May 5 Dynamite.

This was a heck of a return. Check out how it went down:

Opinion: Assuming you can ignore seeing Rhodes through the window of the bus, this was a rather cool return as Rhodes goes to come in and get his revenge on Marshall for the attack a month ago. That is the kind of thing that could keep a feud going and now we are coming up on a pretty big grudge match between the two of them. That isn’t bad for a one off segment.

Another important point from this was seeing AEW building up Marshall as a new star. Marshall is not someone with the biggest reputation or resume over his career so giving him something like this could help him a lot. Maybe this leads somewhere for him or maybe it doesn’t, but it very well may be worth giving him a chance if they have the right story. It can’t hurt to try and if it doesn’t go well, it can be dropped in a hurry.

What did you think of the return? How do you expect the match to go? Let us know in the comments below. 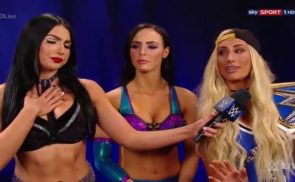