It was a busy show. This week’s edition of SmackDown was a special show as the event took place at Madison Square Garden in New York City. While that is a big deal on its own, the fact that it was taking place twenty years minus one day after the September 11 attacks made things feel even bigger. WWE was going to bring out the big names for this one and they did that during the show. It turns out that they did it before and after the show as well.

WWE held a dark match both before and after this week’s SmackDown aired live, along with a segment after the show went off the air. Before the show aired, Raw Women’s Champion Charlotte faced Rhea Ripley. There is nothing to suggest that the Monday Night Raw roster will begin touring with the SmackDown roster as this was likely a special event only for the big show.

Immediately after the show went off the air, Happy Corbin appeared to confront the Demon, who had been in the ring to end SmackDown. The Demon attacked Balor on the floor and laid him out before leaving the arena. Following that, John Cena teamed with Rey Mysterio and Dominik Mysterio to face the Bloodline. This is the final scheduled appearance for John Cena for the time being.

It was a busy night. Check out what happened during and after the show: 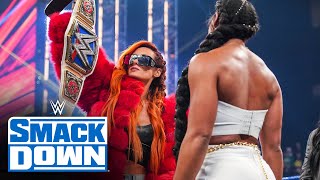 Becky Lynch goes off on Bianca Belair and the WWE Universe: SmackDown, Sept. 10, 2021

Opinion: You could feel how special this show was and that is the kind of thing that WWE needed. They have not had the best news in recent months and having something go this well was a welcome change. I’m not sure what is next for WWE but at least they did something very well with this show. You can see the star power on the show, but it seems there was even more when the cameras were off.

What did you think of the show? Which of the dark matches sounds better? Let us know in the comments below.