Welcome back. There are a lot of wrestlers on the AEW roster and some of them have carved out quite the niche for themselves. The roster has a wide variety of styles and experience which can be combined to make some very interesting feuds. That has been the case over recent months and now one of the stars has returned, meaning that things are picking up again.

This week’s AEW Rampage featured the return of Hikaru Shida, who ran to the ring to save Leila Grey from an attack at the hands of Serena Deeb. After Deeb defeated Grey, she applied the Serenity Lock, causing Shida to return for the save. This is Shida’s first appearance since January when Deeb injured her during a match. The two have been feuding since October, splitting four matches in the process.

It was a cool return. Check out what happened on Rampage: 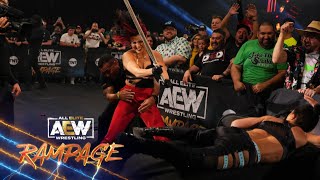 Opinion: I’m a bit disappointed in this as there is little reason for the feud to continue. Deeb has been on a roll in recent weeks and it feels like a step backwards to continue the feud with Shida. Hopefully they have one big blowoff match and wrap things up so both can move on. The feud was good, but it has been going on since October and it is time for something new for both women.

What do you think of Shida’s return? What do you see her doing next? Let us know in the comments below.