VIDEO: Retribution Has A Leader After A Shocking Heel Turn

Tell me more. There are so many people in WWE at the moment that it is not easy to find something for all of them to do. That has been a problem in the past and it still is even to this day. There are all kinds of stables throughout the roster to give the people as much time as they can, and now one of the bigger ones has gotten a very surprising new member added to the lineup.

Over the last two months or so, Retribution has become a major problem for Monday Night Raw. The group of masked wrestlers has attacked members of the roster and laid waste to several of them but only lately have things started to have a direction. The team still does not have a clear leader, but that changed this week in quite the surprise twist as a new member was revealed.

This was shocking. Check out how Retribution got a lot bigger in a hurry:

This week on Monday Night Raw, Mustafa Ali joined Retribution and seemed to be revealed as the team’s later. Retribution interrupted a match between Ali and MVP of the Hurt Business, causing MVP to tell Ali to fight with them. Instead Ali dropped to the floor and looked at Retribution before ordering them to attack. Ali looked on as the beatdown ensued before eventually posing in the ring with the team.

Opinion: This has my attention and that’s the first positive for Retribution in a long time. Ali has been needing a direction for a long time now and this works as well as anything else. Now if only they can tie in the hacker thing it would be even better, but that is pure fan service at this point. I’m rather pleased with the move, mainly because Ali is way too good to be sitting on the sidelines.

What do you think of the move? Where does it go from here? Let us know in the comments below. 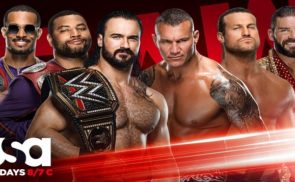 Main Event Set For Hell In A Cell