With a special guest star. There are a lot of wrestlers working for WWE but they are not the only wrestling company in the world. Those other wrestlers are all very talented and can do all kinds of great things in the ring. WWE certainly knows this as some of those wrestlers have worked for WWE in the past. While rare, sometimes we see some cameos from those outside of WWE and that can be rather interesting.

Davey Boy Smith Jr., formerly known as David Hart Smith, made a surprise appearance on this week’s edition of the Bump. Smith appeared in a segment with former partner Tyson Kidd, who was appearing with his wife Natalya in honor of Valentine’s Day. During the show, Smith talked with Kidd’s other former partner Cesaro, with the two of them both saying they would like to face each other. Smith, currently wrestling for Major League Wrestling, wrestled for WWE from from 2006 – 2011 and appeared under the Hart Smith name on the show.

It was a nice surprise. Check out Smith’s appearance, which starts at about the 43:00 mark:

Opinion: Smith is one of those guys who could have been a big star based on his look and pedigree alone, but for some reason it never clicked. That being said, he has gotten that much better since leaving WWE and it wouldn’t surprise me to see him come back to the company later on. Maybe that will be the case later on, but for now, Smith is rather fun to watch elsewhere and seems to be enjoying himself so good for him.

Do you think Smith will ever be back in WWE? Do you want him to be? Let us know in the comments below. 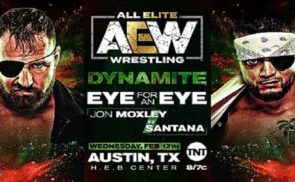