(VIDEO): R-Truth Sings A Funny Song About Being 24/7 Champion While Hiding Out

He’s multi-talented. This week on Monday Night Raw, WWE introduced the 24/7 Title, which is exactly what it sounds like: a title that is defended all day every day, which his going to create some interesting problems for the champion. They have to keep an eye out for challengers all the time because the title matches can take place anywhere, anytime. This has gotten the champ to thinking.

This guy is just entertaining. Check out R-Truth’s song about being 24/7 Champion:

Current 24/7 Champion R-Truth has released a video of himself singing a song about being 24/7 Champion, which makes him sound a bit sad about the whole thing. R-Truth talks about being champion all the time and having to hide to make sure he stays that way. He mentions coming to Monday Night Raw if he has to and wanting to get back to hiding with the title for as long as he can.

Opinion: This was rather amusing and shows how many doors could be opened with the title. R-Truth is a hilarious performer and the best choice for the comedic part of the title given how creative he has been with some of his gags. The idea can only go on for so long, so enjoy R-Truth as long as you can. It has been funny so far, though I’m not sure what kind of a shelf life the idea has.

How long can the title go on for? Who will take it from R-Truth? Let us know in the comments below. 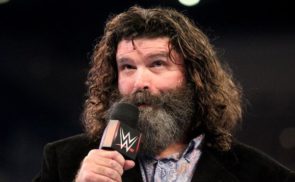 Backstage News On Jon Moxley Joining AEW; When Will He Make His In-Ring Debut?