He would know best. There are a lot of moves taking place in the wrestling world these days and that can make every day different. You never know when you might see someone moving to another company or even announcing that they are staying with a company for a change. It makes things interesting, with all kinds of changes that can take place. This time around we don’t have a new move, but we have the settings for one.

A lot of wrestlers have moved around over the course of their careers. It makes things that much more interesting when you can see a wrestler who made their name in one place go elsewhere, because they’re both familiar and new at the same time. When you have wrestlers’ contracts expiring at set times, the countdown can be on and now a big name has announced that he is officially a free agent.

Matt Hardy has released a new video to his YouTube page, announcing that he is officially a free agent as of March 2. The video, an edition of Hardy’s Thoughts From The Throne theory, was released just after midnight. Hardy said that he loved WWE but has decided to leave, meaning that he could go anywhere. He mentioned possibly joining several wrestling promotions, including AEW, WWE, Ring of Honor, NWA or an unspecified promotion in Japan.

Hardy has been around for a long time. Check out his announcement and some of his moments in the ring:

Opinion: I’m not sure what to think here. Hardy is someone who clearly has a great mind for the business but at forty five years old, and with a lot of miles on his body, I’m not sure how much more he can actually do in the ring. That’s what he seems interested in doing, but will that be a long term option? Hardy can be a major asset to any wrestling company backstage, though on camera might not be so viable.

Where do you think Hardy will go next? Should he stay in the ring? Let us know in the comments below. 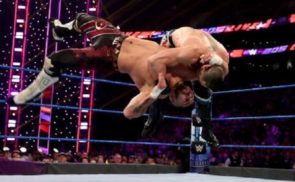