Now this is a random one. While WWE is the undisputed king of professional wrestling, there is a completely different world of wrestling outside of its walls. This is the world of independent wrestling, where you never know what you’re going to get. There are a lot of ex WWE names on independent shows and over the weekend, one of the biggest names in wrestling today took on a pretty unique opponent.

That’s quite the way to answer. Check out Moxley coming out for an open challenge:

Earlier this week, Jon Moxley answered an open challenge from CazXL (better known as Big Cass) and nZo (better known as Enzo Amore) at the Northeast Wrestling Six Flags Great Adventure show in Jackson New Jersey. Moxley was a surprise on the show and went on to defeat CazXL in the match, along with hitting Dirty Deeds on nZo as a bonus. This was their first singles match against each other.

And that’s how you finish it. Check out Moxley laying out both guys:

Opinion: This is the kind of thing that you can only get in independent wrestling and that’s a great thing. Just watch the fans go nuts when they see Moxley come into the arena. It’s a cool moment and the kind of thing you don’t get to see in a major show. Throwing in a surprise like that is going to make the fans want to come back and for an independent company, that’s hard to accomplish.

How great is Moxley at the moment? Who do you want to see him face? Let us know in the comments below. 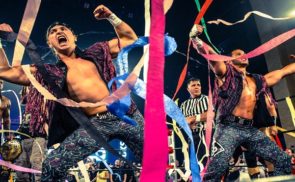 (WATCH): Lucha Bros vs. Young Bucks In A Double Or Nothing Rematch.