A take you don’t often hear. I know some people might not be all that fond of him, but there are few stars in the history of wrestling on the same level as Hulk Hogan. He revolutionized wrestling back in the 1980s and his impact is still being felt today. Hogan will still popup in WWE every now and then and that is what he has done again, albeit in a very different way.

One of the things that you don’t often get in wrestling is the perspective from the wrestlers themselves. As strange as it may seem, they have the most unique perspective of anyone watching their matches because they are the only ones who know what it is like to actually get in the ring. That isn’t something everyone else can say and it is interesting to hear what they thought about any given match. That is the case again now.

The latest edition of WWE Playback features Hogan and Sgt. Slaughter watching their match from WrestleMania 7. The two of them met in the main event of the show with Hogan defeating Slaughter to win the WWF World Title for an unprecedented third time. Hogan and Slaughter watch the match and offer a bit of commentary and trivia as the match goes on in front of them.

It’s quite the cool idea. Check out Hogan and Slaughter watching their match:

Opinion: This is the kind of thing I could watch almost all the time as the two of them are going to know things about this match that no one else would. The match was almost thirty years ago and it is great to see something like this after all those years. I have no idea why WWE doesn’t do something like this with full matches of even full pay per views as it would certainly offer a unique perspective.

Which wrestler does the best commentary? Which matches would you like to see get this treatment? Let us know in the comments below. 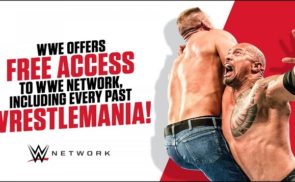 AEW May Lose Dynamite Venue Due To Jacksonville Government