It might be interesting. The WWE releases from April are still falling out as the question now becomes where these wrestlers are going to go next. They are still under their ninety day no compete clauses, which could make for some interesting fallout when some wrestlers wind up in different places. They aren’t the only releases to take place this year though, and now one of the bigger names let go is looking for a huge match.

During Saturday’s AAA Rey de Reyes event, former WWE star Andrade made a surprise appearance in a video, challenging AAA Mega Champion Kenny Omega for a title shot at this year’s TripleMania event. TripleMania is the biggest event produced by AAA every year, though it is not clear when the event will be taking place. The most recent edition was held in December, though that show had been postponed due to the Coronavirus pandemic.

Andrade has not yet wrestled since leaving WWE, though he is rumored to be facing Alberto El Patron in a match on July 31. It is not clear when he will be wrestling again or if he will be wrestling before TripleMania. Omega is currently the reigning AAA Mega Champion, the Impact Wrestling World Champion and the AEW World Champion. Andrade only mentioned the Mega Championship in his challenge.

It could be interesting. Check out Andrade’s challenge:

Opinion: This is something that could be interesting as Andrade is certainly a top name star and someone who could be a real threat to Omega. If nothing else, it is nice to see him getting this kind of a chance to shine outside of WWE. Assuming the match takes place, it would not be shocking to see Andrade take the title to knock one of the jewels out of Omega’s triple crown.

What do you expect from the match? Who will leave as champion? Let us know in the comments below. 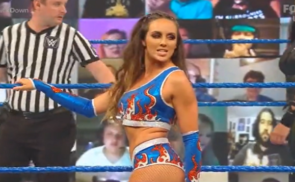 Chelsea Green Had Some “Interesting” Ideas For Her WWE Character

Here’s What’s Next In A SmackDown Grudge Feud