You need a next step. There are a lot of people under the WWE umbrella and some of them leave the company under one circumstance or another. Some of these departures might be more amicable than others but one thing is certain for everyone who leaves: they need something to do after they leave. One recent talent to leave knows this and already has something lined up.

Earlier this week, WWE released or furloughed all kinds of wrestlers and other employees in the span of a few days. However, they are not the only people to leave the company this year. Back in February, interviewer Cathy Kelley left the company as well. The departure was a bit of a surprise as she was a good backstage presence, which is going to be enough to get her another on-screen job.

According to Superluchas.com, Kelley has a role in the new Netflix comedy BlackAF. Kelley plays an airline stewardess in a short role on the series. It is not clear if she currently has any other acting roles planned. Kelley left WWE in February after four years with the company, saying that she was not happy with the travel schedule that came with staying with the company.

Opinion: It’s easy to see why someone like Kelley would get into acting. She is comfortable in front of a camera and has a ton of experience, so it makes sense to see her getting into acting. This is a small role of course, but at the same time it is something that she can use to show what she can do on film. Not everyone gets to do something like that and Kelley has at least gotten a foot in the door.

Did you like Kelley’s time in WWE? Do you think she can make it as an actress? Let us know in the comments below. 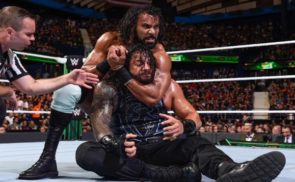 WATCH: Roman Reigns vs. Jinder Mahal From Money In The Bank 2018