VIDEO: Becky Lynch Was Like An Animal After Monday Night Raw

Hold tight because the show is not over. WWE has a lot of television content in any given week and that is quite the issue to deal with a lot of the time. Just Monday Night Raw and SmackDown fill in five hours of television a week but sometimes WWE has even more than that. It was the case this week, as there was a little something extra to cover after the show was over.

The main event of this week’s Monday Night Raw saw Becky Lynch defeat Asuka in a no holds barred match. As a result of the ring, Lynch declared that she was back to end the show. Following the show, Lynch cut a promo on the crowd, declaring herself the greatest of all time and making a goat sound. The match ended a rivalry between the two, which began when Asuka’s return interrupted Lynch’s speech earlier this year.

She might be on to something. Check out Lynch addressing the crowd: 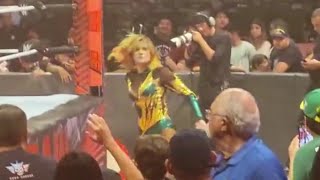 Opinion: This is the kind of thing that fits well as the wrestlers wrap up the night. Lynch gets to do something that makes sense and show off a bit more for the life fans. It makes sense that Lynch would want to declare herself the best ever based on one win and that is how the night ended. I’m curious to see where this goes from here, but you never can tell with some of WWE’s stories.

What do you think of Lynch? Who is the greatest women’s wrestler ever? Let us know in the comments below.