I’d think he’s earned it. There are very few wrestlers in the world today who are as famous as Chris Jericho. He has been in the wrestling industry for almost thirty years now and has accomplished almost everything there is to accomplish. In addition to wrestling, Jericho has also spread into various other industries, many of which have been successful as well. One is more than the rest though and now the two are becoming one.

Jericho remains the biggest signing that AEW has ever had, but he came with a bit of a bonus. Since Jericho is the lead singer of the band Fozzy, he had quite a few songs to pick from for his entrance music. In the end he went with Judas, which is a rather catchy song. It is catchy enough that his fans like singing the song back to him during his entrances, but how well do his co-workers know the song?

I’d call it a tribute. Check out the AEW roster trying their voices at Judas:

In honor of Jericho’s upcoming thirty years in wrestling celebration, AEW has released a video of various wrestlers trying to remember the lyrics to Judas. The video includes names like Matt Hardy, Santana and Ortiz, Jake Hager, Colt Cabana, Hangman Page and more singing along with the song. Jericho’s thirty year celebration will be taking place on the October 7 edition of Dynamite.

Opinion: AEW has managed to do something in one year that so many promotions take far longer to accomplish: they have some catchy theme songs. Judas is the highest on the list and was something you could recognize as soon as it started, which makes you know that things are picking up. That is something you can always use and Judas is a rather catchy song, making this a lot more fun to watch. It’s a cool video and made me chuckle more than once so well done.

What do you think of the song? What is your favorite wrestling theme? Let us know in the comments below. 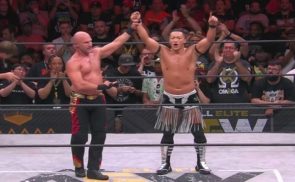