It’s better than nothing. Despite all of the talent that WWE has available on its roster, it is rare to see a lot of them actually appear. There are so many wrestlers who are just there with nothing to do, to the point where they are not seen for months at a time. That makes for some interesting moments when they do show up, and one recent such surprise might be setting up something a little bigger.

Opinion: I’m not sure how much drama there was over Carrillo winning the title if/when he received the shot, but it has been a little bit interesting to see what happens as he continues to come out and confront Sheamus. The US Open Challenge is a good idea and something I could go for in the future, though it seems to be setting up one feud here instead of something long term.

At the same time, it is also better than nothing for Carrillo, who has not been featured on Monday Night Raw in over six months and has not won a match on the show since June. I like the idea of doing something with one of the talented members of the roster though, even if it is just something short term. Carrillo is talented, but this seems to be setting up something bigger for someone else, which is not the worst spot to be in.

What do you think of the story? Where is it heading? Let us know in the comments below.

Wherefore Art Thou Champs? Update On AJ Styles And Omos 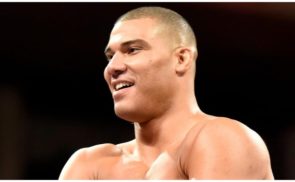