Shake things up a bit. Wrestling is the kind of industry that can change in the blink of an eye. You never know when something might be switched up because of one reason or another and that can become an issue at any given time. Sometimes it could be a change in creative or it might be an injury taking place, and in this case the latter has changed WWE’s current plans.

Last week, a story came out saying that Braun Strowman was the scheduled challenger for Drew McIntyre’s WWE Championship at Tables, Ladders And Chairs later in December. However, Strowman then came down with a knee injury and the plans had to be changed, with AJ Styles becoming the new #1 contender this week on Monday Night Raw. Now we know a bit more about the changes.

According to Fightful Select, Monday Night Raw’s creative plans had been changed due to Strowman’s injury. The injury cause WWE to set up the series of matches to set up the triple threat match between Styles, Riddle and Keith Lee to crown a new #1 contender. As a result, all of the three participants’ stories were changed as well, with the changes expected to last one to three weeks. There is no word on when Strowman will be back in the ring.

This is what we got instead. Check out how the triple threat went down:

Opinion: There is something fascinating about seeing all of these changes taking place and how everything needs to be moved around over one person. Strowman injuring his knee is an understandable situation and something that can happen to anyone, but now we know where things are going instead. This is also where WWE’s roster depth comes into play, as they have several options to replace Strowman at the drop of a hat.

What do you think of the changes? What will Strowman do when he is healthy? Let us know in the comments below. 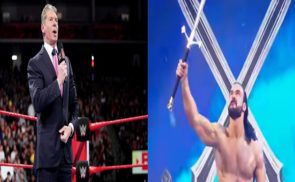