That’s a big step. There are a lot of things that take place in front of a camera on any wrestling show, but what happens backstage might be even more interesting most of the time. You don’t know what kind of things you will hear about taking place that could shake things up in a big way, but now it seems like we could be in for the next step in fixing the latest backstage dust up.

Over the weekend, stories began to emerge about issues between AEW and Maxwell Jacob Friedman, including Friedman missing a meet and greet appearance. There was a question about whether Friedman would appear at the show, which he ultimately did, losing to Wardlow in the opening match. According to Fightful Select, a meeting is planned between Friedman and AEW President Tony Khan in the near future, though it is not clear if this is this is still all part of a storyline. Friedman’s AEW contract expires January 1, 2024, when he is expected to be the subject of a WWE and AEW bidding war.

Opinion: This continues to be one of the most interesting things going in wrestling at the moment as I’m not sure what to think about the whole situation. It would not surprise me whatsoever if this was all a storyline and there was never any doubt about where Friedman was going in the first place, but if that is the case, they are doing a great job with the whole deal. This is going to be interesting though and I’m really curious to see how it all plays out.

What do you think of the situation? Where will Friedman sign in 2024? Let us know in the comments below. 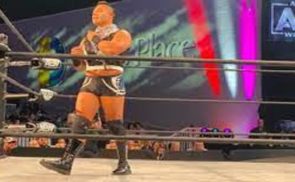