Tyler Breeze Gives A Great Look Back At Breezango’s Career

He’s keeping track of things. You never know how long someone’s career is going to start when they first appear for a promotion. That can make something rather interesting as someone can appear to be nothing important and wind up becoming a big star. These can be rather surprising but still fun moments. We saw one of these on Wednesday and it was a long time coming.

This week on NXT, Breezango won the NXT Tag Team Titles, marking their first championship either as a team or as a solo wrestler. The team has been together for the last several years but they have been delayed multiple times due to major injuries to Fandango. It was a long road to make it here, and Breeze has been documenting that journey the entire way.

Breeze has sent out a tweet following the title win, breaking down the amount of time it took him to reach this point and the number of matches he has had in WWE. It has been 3023 days since his NXT debut as Mike Dalton, during which he has wrestled 882 matches. It had also been 1569 days since he and Fandango began teaming together. There is no word on when the two will have their first defense.

3023 days since I wrestled my first @WWENXT match as Mike Dalton. 882 matches since then. 1569 days of being a tag team with @WWEFandango Thanks Bud. We did it.

It has been a long road. Check out their time together and Breeze’s solo career:

Opinion: That’s the kind of thing that puts a lot of time into perspective. Breeze has been around for a long time and Breezango has quite the history of their own. It is great to see that the two of them have had some success like this. Even if the title reign doesn’t last that long, the fact that they made it to the top of the mountain, even for a short amount of time, is all that matters.

What do you think of Breezango? How long will they hold the titles? Let us know in the comments below. 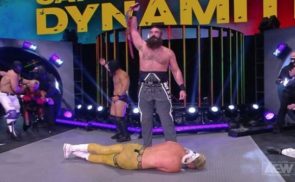