A Twisting Surprise. There Was A Face Turn And A New Team Formed To End Monday Night Raw.

Raw and surprising. Wrestling is the kind of sport where you see the same matches happening over and over. That has to be the case given the size of the rosters and the amount of television that is presented on a weekly basis. Some of these feuds are a lot better than others, but even the best ones eventually get caught in the eternal problem of happening too many times and the fans just get sick of them. Other times though, they aren’t that interesting in the first place and then things just keep going. This seems to be the latter.

This week on Monday Night Raw, Natalya needed a mystery partner to face the Kabuki Warriors. Natalya chose recent rival Lacey Evans, who she had fought five times in seven weeks, with their most recent match being a Last Woman Standing match won by Natalya last week. The match was the first time the two had ever teamed together and may be the start of a long term, permanent team for them. Evans and Natalya lost the match when Asuka rolled Evans up.

It was quite the surprise. Check out their tag match: 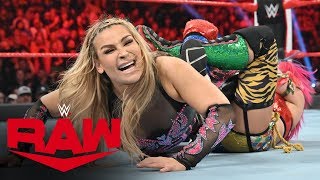 Opinion: This is one of those “twists” in a story that you almost had to see coming as soon as the mystery partner was brought up. Natalya and Evans’ feud wasn’t exactly interesting in the first place and this didn’t make it much better. Then to top that, they lose their first match together. I’m not sure if this is going to be a permanent deal, but the two of them as a team just because they were feuding for weeks isn’t something that I need to see going forward. Maybe it winds up being better than it seems, though it doesn’t sound promising.

Do you like the idea of Natalya and Evans as a team? How good can they be? Let us know in the comments below.