WWE taped its annual Tribute to the Troops show this week in Washington D.C. The show will feature celebrity appearances, video packages on wrestlers meeting with members of the military and of course a wrestling card. As is always the case, the show was taped in advance and here are the spoilers. The show will air Wednesday December 14 at 8pm EST on USA.

Full credit for the spoiler report to WrestlingInc.

Thanks to Jonny Moniz for the following WWE Tribute to The Troops spoilers from tonight’s tapings in Washington, DC. These will premiere on the USA Network tomorrow night:

* Lilian Garcia is out for the National Anthem

* WWE Intercontinental Champion The Miz came out to issue an open challenge for a non-title match. Apollo Crews answers and comes out with Gabriel “Fluffy” Iglesias. Crews ends up getting the win with a distraction from Fluffy

* Backstage segment with Bayley, Dana Brooke and a service dog

* Backstage segment with The Shield, The Club and The New Day gets a big pop

This is pretty much par for the course at one of these shows. The bad guys almost never win a thing at Tribute to the Troops and there’s no reason for them to. The show doesn’t mean a thing and it’s all a setup for the big ending with the Americans beating the evil foreigners. It’s not the most thrilling idea but it works perfectly well for the stories they’re going for with this show. 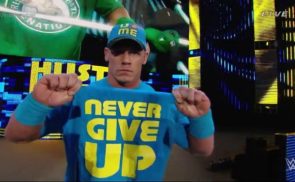 Here’s When John Cena Will Be Back on WWE TV 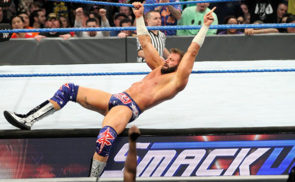 New #1 Contender Crowned on SmackDown, But Injury Is Already Jeopardizing the Opportunity