Here they come again. There are some people you can almost guarantee will be around the title picture no matter what goes on. Maybe it’s because they’re popular, talented, reliable, or some combination of the three. That can be the case for singles or tag team wrestlers and it is the case again at the moment, with a rather popular team getting to add even more to their resume.

There has not been a team like the New Day in a very long time. The team has been around for over five years now, which is an eternity in today’s wrestling world. There is very little that they haven’t done, including seeing Kofi Kingston win the WWE Championship last year. However, they are mainly a tag team and that was on display again this week.

In the main event of this week’s SmackDown, Big E. won a triple threat match over Jey Uso and the Miz to win the Tag Team Titles for the team. Miz was defending the titles for himself and John Morrison after Morrison successfully did the same thing at WrestleMania. This marks the eighth reign for any combination of the New Day, with the team defending the titles under the Freebird Rule despite Xavier Woods being injured.

It’s a big deal for Big E. Check out how the title match went down:

Opinion: New Day winning the titles is a cool moment, though it feels like something that we have seen time and time again. They seem to be placeholder champions, but how long are you holding a place before you are the place yourselves? The team is great and there is nothing wrong with giving them the titles again, but how long can we keep seeing the Usos and the New Day in the title picture?

Do you like the title change? Who will take the titles from New Day? Let us know in the comments below. 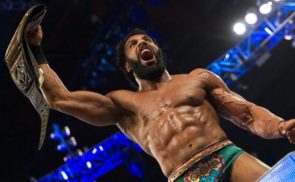