History has been made! There are a lot of titles in WWE and it is easy to see why. With so many wrestlers and two unique rosters, titles are one of the best ways to keep a story going. Just take a title and have some people fight over it for a few months. That works as well as anything else and WWE has done just that on multiple occasions. Now, they are doing it again.

A first title can mean a lot to a wrestler who hasn’t made it to the next level quite yet. It serves as a status symbol and lets the wrestling world know that they are moving up the ladder. Not everyone can win something and it is nice to see someone getting a chance to showcase themselves on a bigger stage. That was the case this week on Monday Night Raw with a new champion crowned.

During this week’s Monday Night Raw, Apollo Crews defeated Andrade to become the new United States Champion with a standing shooting star press. This marks Crews’ first title in the company after debuting on the main roster the night after WrestleMania 32 in 2016. Crews lost a previous title shot earlier this month due to a referee stoppage over a knee injury suffered earlier in the match.

It was a big deal. Check out the title match:

Opinion: This is the kind of thing that they needed to do a good while ago. Andrade had held the title for about five months and hadn’t exactly done much in the first place. It makes sense to give Crews a chance, though it isn’t going to matter who the champion is if they aren’t allowed to treat it like something that mattered. Hopefully WWE changes things up a bit because Crews could be entertaining.

What do you think of Crews as champion? How long will he hold it? Let us know in the comments below. 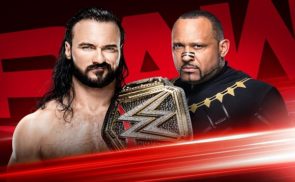