It’s a different world out there. Over the weekend, AEW presented its second event with Fyter Fest. The show was a rather different presentation than Double Or Nothing, with a smaller card and almost an entire focus on actual. However, there were some similarities, including some rather violent ones. This is all before the weekly AEW shows begin. So how much violence can we expect there?

During Fyter Fest, Cody was attacked by Shawn Spears, who hit Cody in the head with an unprotected chair shot. This is a kind of attack that has been banned in WWE. After the show was over, AEW President Tony Khan said that such a thing will not be happening when the company’s weekly show debuts on TNT. While such actions are not going to take place on television, last night’s show was streamed online instead.

There is a lot here. Check out Khan’s post show interview: 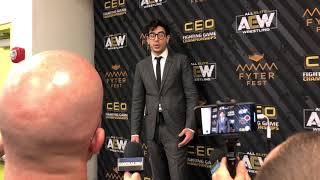 Opinion: This is the kind of thing that does not need to happen in wrestling. We have firmly established that these shots to the head are dangerous and seeing another one last night just made me cringe. There are dozens of other ways to do something like this and none of them involve someone taking an unprotected chair shot to the head. It doesn’t need to happen and no one benefited from the shot. Don’t do this again.

What did you think of the shot? How bad did this look? Let us know in the comments below.