This is another special event with WWE presenting a show for the sake of having some competition. The schedule says that this is going to be an hour long show but an overrun would not surprise me. There are three matches on the card and an Elias performance for a bonus, meaning they’re going to be fairly packed. Let’s get to it.

The announcers tell us that Finn Balor is injured and therefore out of the Intercontinental Title match. This brings out Intercontinental Champion Shinsuke Nakamura to say that he wins by forfeit, but the referee has to count Balor out first. We have a challenger though.

Ali is challenging after saying that he isn’t missing another opportunity. Feeling out process to start until Ali kicks him in the face and out to the floor. That means a big dive to the floor and a high crossbody for two back inside. Nakamura knees him in the face and Good Vibrations have Ali in even more trouble. The hard knees to the face get two and it’s off to a front facelock.

Nakamura switches into a front facelock but Ali fights out again and hits the rolling X Factor. Ali gets thrown off the top but still manages to dropkick Nakamura out of the air for two more. Back up and Nakamura hits the sliding German suplex but Kinshasa is cut off by a superkick. The big tornado DDT gives Ali two more but the 450 misses. Kinshasa retains the title at 8:02.

Samoa Joe likes the idea of a triple threat match because he has multiple targets.

Here’s Elias for his performance and he has several guitars with him. After complaining about the volume of his microphone, Elias plays for a long time, maybe the longest he ever has before. Elias likes that people want to walk with him but he hears no standing ovation. He talks about meeting Johnny Cash here in Nashville, when Cash told him that the Tennessee Titans will never win the Super Bowl.

His first song is dedicated to Shane McMahon….or it would be if the people would be quiet and let him play. Elias going to and from the stool gets the BOO/YAY chants before he says he’ll sing anyway. The song is about how Shane deserves more TV time and to be champion because he’s the best in the world. Vince McMahon calls him to say he’s watching and Elias says Nashville is horrible. Apparently Elias can have as much time as he wants so he sings about Kevin Owens being ugly.

Cue Owens from behind to steal a guitar and send Elias outside with one right hand. Owens has a request: SHUT YOUR FACE. He wants a match right now, so if a referee can please run down the aisle and slide in here please. A referee does so (Owens: “WHAT A SLIDE!”) and we’re ready to go.

Owens shrugs off an early beating and hits the backsplash to take over. Elias gets in a jumping knee to the face to rock Owens and it’s an Old School Meteora for two. A headbutt gets Owens out of a superplex attempt and the Swanton connects for two. The Stunner is blocked and Elias hits another knee. Elias’ top rope elbow misses and the Stunner gives Owens the pin at 4:44.

We recap the main event. Kofi Kingston won the Smackdown World Title at Wrestlemania and has survived ever since. Dolph Ziggler thinks it should have been him and Samoa Joe likes to hurt people. Kofi has beaten them both before and now he has to beat them both at once

Kofi Kingston puts pancakes behind the title and says he wants the challenge to put him closer to being an all time great champion. Kofi: “Right here on Smackville. At Smackville? In Smackville?”

Kofi is defending and dropkicks Ziggler to the floor at the bell. Ziggler pulls Kofi out with him and it’s the champ going into the barricade. The double teaming begins as the fans are behind Kofi. A double back elbow drops Kofi again but he fights out of Joe’s clutches. The crossbody hits Ziggler with Joe stealing the two count.

That’s enough to break up the alliance and Kofi takes down the arguing villains with a top rope shot to their heads. There’s the Boom Drop to Ziggler but Joe powerslams Kofi to break up Trouble in Paradise. A superplex is broken up and Kofi hits the high crossbody for two on Joe. The SOS gets the same on Ziggler as an angry Joe makes the save. They all head outside and Kofi is whipped into the steps to keep him down. Ziggler gets thrown over the announcers’ table and Joe elbows Kofi in the face back inside.

Kofi jawbreaks his way to freedom from the Koquina Clutch but Joe slaps on an ankle lock of all things. That’s broken up by a Ziggler superkick for two with Kofi making his own save. The Zig Zag gets two on Kofi but Joe suplexes Dolph to the floor. Joe blasts Kofi with a clothesline for two and tries the Clutch, which is reversed into Trouble in Paradise to retain the title at 12:09. 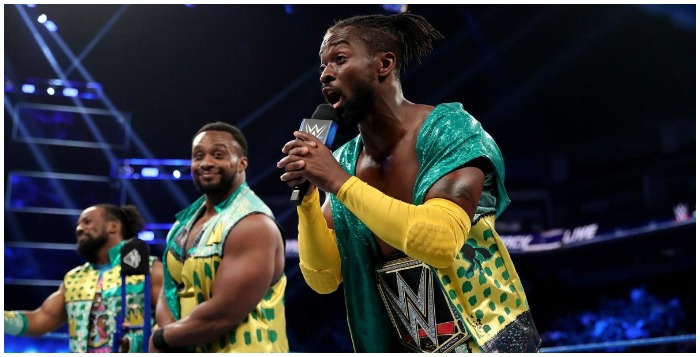