We’re still in England and it’s a huge night with two title matches. Tonight the Usos will defend their Tag Team Titles against Chad Gable/Shelton Benjamin, but the real main event will see Smackdown World Champion Jinder Mahal put his title on the line against AJ Styles. These matches have major Survivor Series implications so let’s get to it.

Here’s Shane McMahon to get things going. Shane talks about the war with Raw, specifically the attack on Daniel Bryan. While Daniel is banged up at the moment, he’ll be back next week. As for tonight, Shane brings out New Day to some clips of their mini invasion last night. New Day didn’t mean to make Seth Rollins and Dean Ambrose lose their Tag Team Titles last night but it’s part of the deal when you prove Raw is the B show. If Raw wants some revenge, New Day will be waiting on them.

Shane joins them in some dancing but here are Kevin Owens and Sami Zayn to interrupt. Sami mocks Shane’s dancing abilities, which Woods finds rather amusing. Owens brings up beating Shane inside the Cell and Sami says they could have beaten Raw by themselves last night. New Day trades some insults with Sami and a match is made for right now.

Kofi gets armbarred to start but lands on his feet out of a monkey flip. That means dancing to trombone music and a dropkick to put Sami on the floor. Sami takes a breather and the delay lets him stomp away back inside to take over. The top rope dive is dropkicked out of the air though and we take a break. Back with Kofi missing Trouble in Paradise and getting caught in a somewhat nasty Blue Thunder Bomb for two. Not that it matters as Kofi pops back up to the top for a high crossbody and the pin at 9:49.

Jinder says AJ is the appetizer to his entree of Brock Lesnar.

Video on the Bludgeon Brothers.

If Rusev, accompanied by Aiden English, wins, he joins the Survivor Series team. An RKO is broken up in the first few seconds and Rusev gets three straight near falls off the jumping superkick. We take a quick break and come back with Rusev holding a chinlock as Orton hasn’t gotten in much offense here. Back up and Rusev stomps away some more, only to walk into the RKO for the fast pin at 6:58. There is still an open spot on the Smackdown Survivor Series team.

James Ellsworth knocks on the women’s locker room door and gets Becky Lynch. They have a match tonight and James laughs off the idea of Becky defeating him. James says this is MANchester after all but Becky questions his manhood to a gasp.

We look at the Siege and subsequent retaliation.

The Smackdown Women’s Team is at ringside. Ellsworth does some pushups but stops to take off his shirt, revealing a horribly pale physique. Becky takes him off the ropes without much effort and rolls Ellsworth around the ring to make him dizzy. An airplane spin makes it even worse for Ellsworth but he knocks Becky outside in a heap. That earns him a missile dropkick, followed by an atomic drop for the comedic portion of the match. The Bexploder makes Ellsworth try a hug, only to get caught in the Disarm-Her for the tap at 5:57.

Post break Charlotte is in Shane’s office but Natalya comes in to interrupt. She’s here to accept Charlotte’s place on Team Smackdown. Shane has another idea though: Natalya defends the title against Charlotte next week.

Usos are defending. The champs jump Gable and Benjamin before the bell and we take a break. Back with the match joined in progress and Jey coming in off the hot tat. Shelton hits Pay Dirt on Jimmy but gets rolled up for two. Gable chop blocks Jey on the floor though and that’s a countout at 1:22 shown.

AJ isn’t the biggest and isn’t the strongest but he works harder than anyone else.

Mahal is defending. AJ grabs a headlock to start but gets LAUNCHED out to the floor as we take an early break. Back with AJ caught in a headlock on the mat but they’re quickly on the floor with Mahal slamming him onto the announcers’ table. We hit the armbar as Mahal slows things down a bit.

Mahal drops a knee but dives into a pair of raised boots, followed by the Phenomenal Blitz. The fireman’s carry backbreaker gives AJ two as you can tell the fans are way into this one. Something like a backdrop into a faceplant gives Mahal two of his own but he gets kicked out of the corner.

The Calf Crusher is quickly broken up and Jinder turns him inside out with a clothesline. That’s fine with AJ who sends him outside for a slingshot forearm. Back in and the springboard 450 connects, only to have the Singh Brothers pull Mahal to the floor. AJ takes out the brothers but jumps into the Khallas.

That’s only good for two though as AJ gets his foot on the ropes and the place goes NUTS at the new hope. Jinder loads up a super Khallas but AJ slips out and snaps his throat across the top, setting up the Phenomenal Forearm for the pin and the title at 16:47 as the fans go coconuts at the pin.

Mahal beats up the Singh Brothers to end the show. 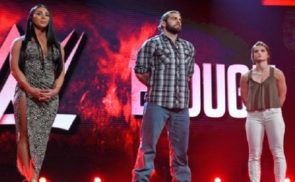 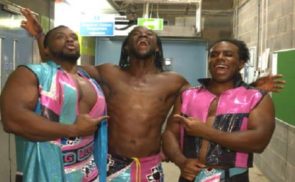