We have about two weeks to go before Summerslam and the question for tonight is “does anything besides Brock Lesnar vs. Roman Reigns matter”. WWE has turned Summerslam into a one match show and that doesn’t leave much for this week. We are getting a Street Profit vs. an Uso though, just in case you wanted some variety. Let’s get to it.

Michael Cole is in the ring to open things up and introduces Pat McAfee, who has signed a multi year extension to remain in WWE. McAfee talks about how special it is to be here for him because he loves this so much. After a rather pro-Pat chant, McAfee thanks the fans for putting up with Corey Graves for two weeks while he was gone. That included BUM A** CORBIN being an idiot last week, complete with video.

McAfee talks about how he and Corbin knew each other before they even came to WWE. They were roommates together as rookies in the NFL and McAfee knew Corbin was nothing special then either. That’s what he’s going to prove at Summerslam, but cue Corbin on screen. Corbin says he’s ready to beat up McAfee, but he’ll be waiting to do that at Summerslam. McAfee isn’t impressed.

Champions Contenders match. Morgan takes her down to start and grabs a rollup, only to be sent into the corner. Natalya knocks her out of the corner but the basement dropkick is blocked. They fight to the apron with Morgan’s Codebreaker being blocked, earning her a trip into the post as we take a break.

Back with Morgan getting out of an over the shoulder backbreaker and striking away. A rollup gets two and a Backstabber with her feet instead of knees rock Natalya but she hits a quick German suplex. Morgan pulls her off the ropes but gets caught in a sitout powerbomb. The ankle lock goes on Morgan sends her into the corner for the break. Oblivion finishes Natalya at 9:04.

Post match Morgan is asked about her victory over Natalya not being as dominant as Ronda Rousey’s was last week. Morgan is used to be the underdog but she’ll still be champion after Summerslam.

Theory is ready for anyone and knows people don’t like him. Paul Heyman comes in and talks about how he likes the theory of Theory cashing in, but doesn’t want to leave Theory to blow his chance. What they should do is work together and set up a scheduled title match. Imagine the prestige, the moment and the money if Theory just doesn’t cash in at Summerslam! Theory is still cashing in at Summerslam to become champion and then he can hire Heyman himself!

Here is the New Day, dressed as the Viking Raiders. After explaining who they really are, Xavier Woods accidentally talks like a pirate because he can’t do accents. To prepare for this, they played a lot of Assassin’s Creed and watched ALL of the Thor movies (Woods: “Yes, even the new one!”) and it seemed to have worked. Cue the real Raiders, with New Day calling them ugly and blowing a horn, which brings out Jinder Mahal/Shanky for the save. So Mahal is a face now. I’ve seen everything. Well not really, but enough of it.

Gunther yells at Ludvig Kaiser, who has to fight Shinsuke Nakamura again next week. After some shouting in German, Kaiser gets chopped again, leaving Kayla Braxton looking terrified.

We look at Lacey Evans turning ;ast week and laying out Aliyah.

Before the match, Lacey brags about herself again before apologizing for last week. That doesn’t work for Lacey, who tells us where we can go and flips the mic away. No match.

It was supposed to be Sheamus instead of Ridge, but the ring announcer said Holland’s name and Butch rang the bell so let’s do it this way. Drew starts fast and sends Holland to the apron for Sheamus’ ten forearms to the chest. Sheamus offers a distraction though and Holland gets in some cheap shots to take over. Drew starts the comeback so Sheamus throws the shillelagh at commentary, leaving Drew to hit the Glasgow Kiss. White Noise sets up the Claymore to finish Holland at 3:25.

Long video on Brock Lesnar taking out Theory and the Alpha Academy on Raw.

Madcap Moss is ready for Theory when Paul Heyman comes in. Heyman reminds Moss of helping him with the biggest break of his career. He remembers Moss giving Happy Corbin a heck of a beating, so maybe Moss could do it to Theory too. It could set up Moss vs. Roman Reigns in the main event of a pretty big show. Think of the money and prestige! Moss thinks Heyman is worried about Theory cashing in at Summerslam. And now it’s time to go to the ring.

They shove each other around to start until Theory runs Moss over with a shoulder. The posing ensues (with Theory’s shoulder blade sticking WAY out) but Moss powers him up into a fall away slam. Theory gets in another shot and puts on the chinlock, which is broken up without much trouble. A running clothesline takes it to the floor, where Moss’ missed charge goes into the steps as we take a break. Back with Theory hitting his rolling dropkick for two but Moss runs through him with a shoulder. The spinebuster gives Moss two and he knocks theory outside, where a briefcase shot to the face gets Theory disqualified at 11:34.

Result: Madcap Moss b. Theory via DQ when Theory used the Money In The Bank briefcase (11:34)

Post break Theory promises to cash in at Summerslam but here is Sami Zayn, with his arm in a sling, to interrupt. Zayn says that is disrespecting the Bloodline, so Zayn wants an apology right now. Theory isn’t impressed, but here are the Usos to scare him off. That is enough for Moss to post Theory and throw him over the barricade.

Sami Zayn is on commentary. Dawkins takes him to the mat and grabs a waistlock to start until Jimmy is back with a Samoan drop. Back up and Dawkins knocks him to the floor as we take a break. We come back with Dawkins hitting a heck of a right hand and the spinning splash in the corner. The referee gets bumped though and Dawkins’ rollup gets no cover. Jimmy’s superkick gets the same, so Dawkins is back with a Sky High for the pin at 7:00, despite Jimmy’s shoulder being up (with commentary loudly pointing it out).

Post match here is Adam Pearce to announce the guest referee for the Summerslam Tag Team Title match: Jeff Jarrett. McAfee spells a lot as the Usos and the Profits brawl to end the show. 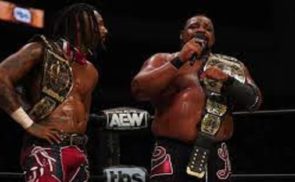 They Had A Plan: Several Details About Recent AEW Title Change, How It Was Set Up 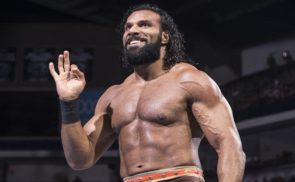 Other Side: Two SmackDown Stars Seem To Turn Good This Week