As tends to be the case far too often these days, WWE is building to several things at once. This time around it’s the go home Smackdown for Super ShowDown, Elimination Chamber is in about two weeks and we’ve got Wrestlemania (and its sign) looming over everything. The big story tonight is Goldberg being in the arena for a change as he’s ready to face the Fiend next week. Let’s get to it.

Here are the Usos to get things going. They aren’t happy with Miz and John Morrison targeting them last week so tonight is about revenge. They’re not coming in alone though so here’s New Day. The Usos are glad to have them here, though they better be keeping those titles warm. Both teams put over the others’ accomplishments but Big E. points out that they’re up 7-6 in title reigns over the Usos. That makes them the better team, but the Usos want one more shot after Super ShowDown. Now it’s Miz and Morrison interrupting and they have a song the fans can sing about their names. They have partners too.

Joined in progress with Ziggler in trouble in the corner, including Big E. whipping the Usos into Ziggler. The Usos send Kofi into him as well but Morrison throws Kofi to the floor for a big boot from Miz. Kofi gets sent into the barricade as Big E. has to be held back. Roode chinlocks Kofi back inside and sends him into the corner for the tag to Ziggler. With the referee distracted, Kofi gets triple choked but Miz spends too much time posing.

Kofi goes up top but gets shoved outside in a big crash. Back from a break with Kofi backdropping Ziggler to the floor and hitting a running stomp on Roode. That’s enough for the hot tag to Big E., who comes in and beats the heck out of Miz. Morrison cuts off the spear through the ropes so Big E. gives him the Rock Bottom out of the corner for two (during the kickout, the screen glitches to show what looks like a letter).

Morrison’s running knee to the face into the standing shooting star press gets two so it’s a spinebuster/Zig Zag combination for two on Jey with Jimmy making the save. A bunch of superkicks have Ziggler in trouble and, after escaping the Glorious DDT, another finishes Roode at 11:45.

Drew Gulak offers Daniel Bryan a PowerPoint presentation about what is wrong with him but Heath Slater comes in. Heath is annoyed at Bryan for beating him (Heath: “You made my kids cry. Nobody makes my kids cry but me!”) so he wants a rematch. Bryan is game.

Tucker accuses Mandy of inviting Dolph Ziggler but Mandy says Ziggler was there when Otis was late. She doesn’t seem to know anything about sending out a text saying she was going to be late.

We get a sitdown interview with Lacey Evans, who was hurt by the loss to Bayley but she isn’t finished until the job is done. Yes she used to be a bully but then Sasha Banks and Bayley brought her daughter into it and that made her change. Now, her sights are on the Elimination Chamber and she will win the Women’s Title at Wrestlemania.

This is a Symphony of Destruction match, meaning there are musical instruments around the ring and falls count anywhere. Elias sings a song to introduce Braun, which actually isn’t interrupted. Braun brings out the huge bass for a nice callback to the first version of this thing. Elias hiptosses a tambourine out of Nakamura’s hands to start and then knees him out to the floor.

Everything breaks down in a hurry and Strowman breaks a drum over Cesaro’s head. That earns him a ukulele to the back from Sami Zayn, which has even less effect than you might have expected. Nakamura catches Strowman with a mic stand to the face though and we take a break. Back with Cesaro playing the cowbell and then sending Elias through a table.

That just earns him the running shoulders from Strowman, followed by a chokeslam onto the apron. Sami offers another distraction though and it’s a double suplex to send Strowman through the bass. It’s Elias with another guitar to the back but Nakamura breaks up an elbow through a table. Instead, Strowman powerslams Nakamura onto (not through) a piano, leaving Elias to elbow Cesaro through the table for the pin at 10:44.

Corbin is tired of Reigns’ face being everywhere and he’s ready to get rid of Reigns one on one at Super ShowDown. Then Corbin becomes the face of the company.

It’s time for a Moment of Bliss, with Alexa Bliss talking about the Hall of Fame. This year’s class includes the NWO and Batista, and now it will also include the Bella Twins, her guests tonight. They can’t believe how awesome this is and they’re all about breaking barriers, like making this announcement on the first ever women’s talk show. Brie brings up being pregnant at the same time and how they find out together.. Daniel Bryan comes out for his match and brings his daughter for the celebration.

Drew Gulak is on commentary and is rather pleased with Slater starting on on Bryan’s knee. A knockdown gives Slater two and he goes up, only to have Gulak yell at him. The distraction lets Bryan move and the YES Kicks are on. The running knee finishes Slater at 2:44.

Mandy is in the back (with another letter glitch, though it might look like a ticking clock) when Ziggler comes up to offer her a ride. She accepts and they leave, with Otis popping up behind them, looking rather sad.

Sheamus is going to be in the Elimination Chamber. So that’s three, minimum.

Shorty G. tries to fire Apollo Crews up but Apollo doesn’t want to hear it. He’ll handle Sheamus his way.

The winner gets Bayley, at ringside, for the Women’s Title at Super ShowDown. Naomi pulls her into a headlock to start but Carmella reverses into one of her own. That’s broken up as well so Naomi gets two off a sliding clothesline. The very spinning headscissors has Naomi in trouble but she’s back in with a high crossbody for two. A quick Bayley distraction lets Carmella get two off a middle rope hurricanrana. That’s enough for an ejection and Carmella takes Naomi out with a suicide dive as we take a break.

Back with Carmella cutting off the dancing kicks and getting two off an Edge-O-Matic. Naomi misses a springboard kick to the head so she settles for a slingshot corkscrew dive to the floor. A sunset flip gets two back inside and Carmella reverses into the Code of Silence. That’s escaped into a Rear View for another near fall on Carmella. A middle rope Blockbuster sets up the split legged moonsault to pin Carmella for the title shot at Bayley at 12:47.

John Cena is back next week.

Here’s Goldberg for a chat. He’s glad to be back and whatever the Fiend is, he’s ready. Cue the Firefly Fun House with Bray doing some construction. Bray wants Goldberg to get to know his friends, including most of the cast. There is one person left though….and the lights go out. The Fiend is here but Goldberg is smart enough to turn around and spear him.  Goldberg loads up another one but the lights go out again and Fiend disappears to end the show, complete with Fiendish laughter. 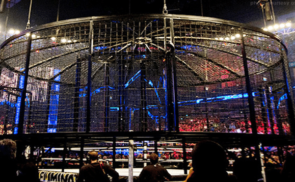