This seems like it’s going to be another midcard heavy episode as the main event players, save for the champion, who is arguably the lowest of the three people involved in the story, who is known to slum it here on Smackdown. The only major event announced is Lana and Dolph Ziggler appearing on MizTV. Let’s get to it.

Here’s New Day to continue their SAVE THE TABLES campaign. Woods: “A table is a terrible thing to waste.” Kofi calls tables the backbone of human achievement and thinks we wouldn’t be here without hard working tables. The pilgrims and Indians had the first Thanksgiving at a table. The Declaration of Independence was written on a table. Walter Cronkite announced the moon landing while sitting at a table. Above all that though: New Day signed their WWE contracts at a table. Kofi: “I remember that!”

The Dudleyz don’t respect tables but we can all change that. A Save-The-Tables clap starts up but here are the Dudleyz to interrupt. We see a clip of Woods going through a table and Bubba says history is going to repeat itself. This brings out the Prime Time Players who say the Dudleyz have to earn their keep. Bubba says they’re here to put people through tables and win championships. Titus has two tickets to send them back to Dudleyville and it’s time for a match.

New Day is on commentary and Woods wants to know why Titus wants to send the Dudleyz back to where they live. That’s not a great gift. D-Von slams Young down and hits a twisting elbow to the jaw. A lot of trash is talked and it’s time for a break. Back with Big E. doing his reporter voice as it’s off to Bubba vs. Young. Woods only sees half of Bubba due to all the camouflage and calls the Dudleyz table poachers. Soon New Day will have heavy heads because they’ll be wearing the crown that makes them the greatest of all time.

The reverse 3D gets two on Young but he enziguris Bubba for a breather. New Day starts a SAVE THE TABLES dance as Titus comes in off the hot tag. Titus cleans house as Woods describes him as a German Sheppard that ate too many stale potato chips. Bubba elbows O’Neil in the jaw and it’s 3D for the pin at 9:07.

Kofi slaps D-Von in the back of the head as New Day leaves.

No match as the Ascension of all people jump Neville during his entrance. Stardust says Neville is flying too close to the sun and the Ascension are the new conniving cohorts. The Fall of Man leaves Neville laying. Welcome to the Cosmic Wasteland.

Cesaro is talking about his match with Sheamus tonight when Sheamus interrupts. Tonight, Cesaro will be good but not good enough, just like always as he disappoints the Cesaro section one more time. Cesaro’s big comeback: Sheamus does look stupid up close.

Cesaro has taped up ribs from going into the announcers’ table on Monday. Sheamus bails to the floor to start and tells the fans that he doesn’t look stupid. It’s quickly back inside with Cesaro clotheslining him down and messing with the mohawk. A suplex drops Sheamus with the ribs having no sign of injury whatsoever. Sheamus sends him hard into the corner though and the ribs are suddenly in agony as we go to a break. Back with Sheamus cranking on a chinlock with a knee in Cesaro’s back.

They slug it out from their knees and Cesaro takes over with European uppercuts. A dropkick knocks Sheamus off the top and out to the floor as Lawler isn’t sure how the ribs are holding up. Cesaro’s big running European uppercut knocks Sheamus into the barricade and Cesaro gets two off a high cross body. So much for the selling. The Irish Curse sets up the Cloverleaf but Cesaro is out before it can go on full. The Crossface is countered by elbows to the ribs and it’s a Brogue Kick to give Sheamus the pin at 10:36.

It’s time for MizTV. This past Monday, Raw turned into Days of Our Lives with everything happening between Ziggler, Lana and Summer Rae. Oh and Rusev is in there too somewhere. We get a long recap package, meaning we see almost the entire thing. Miz’s first guest tonight is Summer Rae, who comes out to her own music.

Summer calls Monday unfortunate but admits that there’s more to the story. Monday night, Dolph kissed her. Miz: “HE KISSED YOU???” It quickly turned from passion to guilt because she already has the most amazing man in the world. This brings out Dolph and Lana with Ziggler making fun of Miz.

Summer accuses Dolph of having something going on with her for months now and we see a clip of Summer kissing Dolph in June 2014, though it seemed to be more to tick off Fandango. Summer says they’ve been together at hotels as recently as last week and Lana goes after her. Lana storms off and Summer shouts that she can’t handle the truth.

Dallas takes him into the corner and slams Truth down before driving knees into the head. Off to some chinlockery but Truth fights up and gets two off a side kick. That goes nowhere as Dallas drapes Truth’s feet over the top rope and twist him down with a suplex spinning neckbreaker for the pin at 2:37.

Bo gives him another one post match and takes a victory lap.

We look back at Monday’s Beat the Clock Challenge with Charlotte getting the Divas Title shot at Night of Champions.

Charlotte praises her teammates when the Bellas come up so Nikki can brag about the record. Charlotte says she’s petitioned the Authority to have their match before the record is broken. If that is approved, the whole record comes crashing down. Tick tock Nikki.

Tamina shoves Charlotte down to start but gets WOOed for her efforts. A test of strength goes nowhere so Tamina takes her head off with a clothesline for two. Charlotte comes back by kicking her in the face and a spear, followed by Natural Selection for the pin at 3:18.

Team Bella comes out to pose.

Long recap of the Cena/Rollins/Sting issues from Monday.

Kevin Owens brags about beating Cesaro twice in a row to silence the Cesaro Section. That brings him to the next people he wants to be quiet: the people who are critical of his weight. He isn’t going to change his diet though. Instead, feed him more.

Big E. and Kofi here and this is non-title. Ambrose and Kingston get things going with Kofi actually punching him into the New Day corner. Woods wants us to pay attention to the educated fists of one Big E. Reigns comes in for half of a double suplex on Big E. for two but gets sent down into the corner as well. It’s time for some trombone playing, followed by a quickly broken chinlock. E. splashes him in the corner but eats a big clothesline, allowing the tag off to Ambrose.

Dean cleans house and feeds Kofi in to Reigns for a clothesline. New Day is knocked outside and Dean dives onto all three as we take a break. Back with Kofi kicking Dean in the chest and slapping on another chinlock. Woods: “I HAVE A TROMBONE!” The Big E. splash gets two but Dean avoids a charge in the corner. He blocks Big E.’s belly to belly superplex and hits a nice missile dropkick. The nip up doesn’t work so well for Dean though.

Reigns comes in to clean house and Jimmy is way too excited. Woods’ distraction lets Kofi grab a rollup for two, earning him a big powerbomb for the same. Dean sends E. into the barricade as Kofi springboards into the Superman Punch, drawing in Xavier for the DQ at 12:07.

New Day gets their clocks cleaned but Dean wants more. He wants another shot at Strowman and the Wyatt Family RIGHT NOW. Bray pops up on screen and says let’s do this at Night of Champions. Can you hear the footsteps of the apocalypse walking among them in the form of a black sheep? Run. 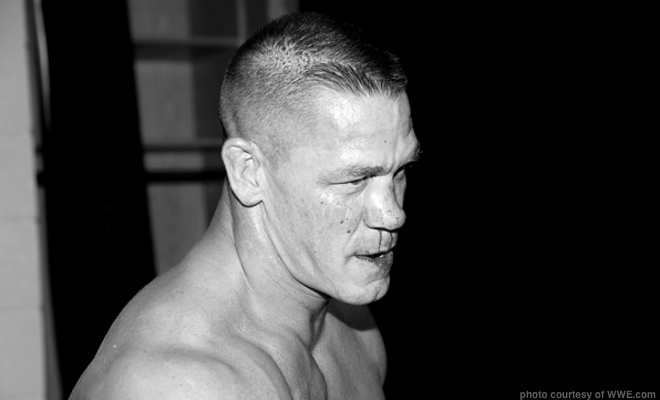 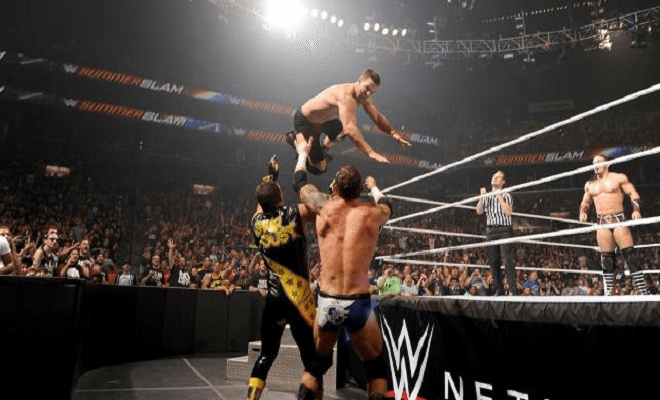