We finally got to the point and had Sting destroy the statue on Raw to end the teasing for the last few weeks. Other than that we also have John Cena vs. Seth Rollins II coming up, which should be a better match and might even get us the US Open Challenges back on Raw. Let’s get to it.

Here’s the Wyatt Family to get things going. Harper says Bray’s words will show you the way. Bray talks about how smart Roman Reigns really is but he doesn’t care about any single fan or about what any of the fans think about him. If Reigns is ever to fulfill his destiny and become WWE World Heavyweight Champion, the people must get on their hands and knees to bow down to Reigns. Anyone but you Roman.

Dean Ambrose on the other hand is cursed with loyalty to someone he believes to be his brother. Ambrose is missing a few pieces upstairs and deserves a warning. The two groups have become a modern day Hatfields and McCoys and will fight each other forever. It doesn’t matter who is joining Reigns and Ambrose at Night of Champions and everyone will fall to the Wyatts. Run.

Cesaro vs. The Miz

Rematch from Monday when Big Show interfered. Miz takes a few moments to take the glasses off so Cesaro, with his ribs taped again, hiptosses him down. The big dropkick knocks Miz off the top and out to the floor, leading to a chase scene. Back in and Miz starts kicking at the ribs before dropping Cesaro across the top rope. Off to a waistlock with Miz’s legs but Cesaro turns around and muscles Miz up into a suplex. Some more shots to the ribs have Cesaro in trouble but he grabs the leg and rolls over into the Sharpshooter for the submission at 4:38.

Jimmy Uso is very excited to be Reigns and Ambrose’s partner tonight.

Both teams get in a brawl before the match and the other four are ejected. Paige grabs a quick rollup and backslide for two each and a sunset flip gets another near fall. With the quick wins not working, Paige knees Sasha in the face to send her outside. Sasha gets in a shot to the ribs to leave Paige laying as we take a break. Back with Sasha choking on the ropes and getting two off the double knees in the corner.

We hit a quickly broken chinlock before a shot to the ribs sets up chinlock’s sequel. Paige fights up with a running knee in the corner and some kicks to the face but Sasha pokes her in the eye. Paige bails into the corner before spearing Sasha down, triggering a brawl for the double DQ at around 9:00.

Result: Sasha Banks vs. Paige went to a double DQ when both women brawled (9:00)

Both groups come out to brawl until referees break it up.

We see most of the end of Monday’s six man tag and Sting destroying his statue. This eats up ten minutes.

Rollins calls Monday the low point of his career because Sting destroyed the proof of his talent. He’s requested a lumberjack match with Ryback tonight so all of the lumberjacks can see that he’s still the best in the world. Sheamus comes up and says Rollins might have three matches at Night of Champions. Or maybe two matches tonight.

No trombone this week.  Woods goes behind Reigns to start but eventually gets his jaw jacked by an uppercut. Off to Ambrose who stalks Woods around the ring until Big E. comes in and takes Dean’s head off with a clothesline. That goes nowhere until Jimmy comes in to clean house as Ambrose takes Woods out with a suicide dive. Uso dives on Woods and Kingston but Big E. pulls Jimmy over the top and out to the floor as we take a break.

Back with Jimmy in trouble and Woods busting out the trombone. Kofi slams Jimmy head first onto the mat but Woods charges into a superkick. Roman gets the hot tag and cleans house with a tilt-a-whirl slam to Xavier, followed by a string of clotheslines in the corner. The apron kick knocks Woods even sillier and the Samoan drop puts Big E. down. Dirty Deeds does the same to Woods and there’s a Superman Punch for good measure. Jimmy goes up top for the splash but the lights go out. When they come back, Jimmy is out cold on the stage. Wyatt’s voice says “they all fall down” and the match is a no contest at 13:08.

Result: Jimmy Uso/Roman Reigns/Dean Ambrose vs. New Day went to a no contest when the Wyatt Family interfered (13:08)

Stardust is with the Ascension. Cara hits his springboard cross body to Viktor before it’s off to Kalisto for some kicks to the face. Everything breaks down for a few moments until Viktor takes Kalisto down with the STO. The Fall of Man puts Kalisto away at 1:40.

The Dragons get beaten down until Neville makes the save.

Nikki Bella accuses Charlotte of being jealous of her. Charlotte comes in and says Nikki’s record attempt ends Monday. Nikki can call her whatever she likes tonight because on Monday, she’ll be calling Charlotte champion.

Lumberjack match and non-title in a rematch of Ryback pinning Rollins on Monday. A shoulder puts Rollins down to start but the champ flips out of a suplex. That’s fine with Ryback as he throws Seth to the floor, only to have Rollins run back inside and send Ryback into the post. All of the lumberjacks are about to fight and we take a break. Back with Rollins getting two off a Sling Blade but charging into a fall away slam. Ryback starts cranking it up with clotheslines and a sitout powerslam for two.

Big Show starts beating people up at ringside and knocks Mark Henry out. All the other lumberjacks tell him to get out, leaving about half of them left at ringside. A spinebuster puts Rollins down again and Ryback backdrops him onto the remaining people. The heel lumberjacks come in and beat Ryback down until the good lumberjacks make the save. Neville dropkicks Stardust to the floor and moonsaults onto everyone……as this match is continuing. Apparently lumberjack matches are No DQ, meaning Kevin Owens is allowed to trip Ryback, allowing Rollins to hit the Pedigree for the pin at 11:55.

Results
Cesaro b. The Miz – Sharpshooter
Paige vs. Sasha Banks went to a double DQ when both women brawled
Jimmy Uso/Roman Reigns/Dean Ambrose vs. New Day went to a no contest when the Wyatt Family interfered
Ascension b. Lucha Dragons – Fall of Man to Kalisto
Seth Rollins b. Ryback – Pedigree 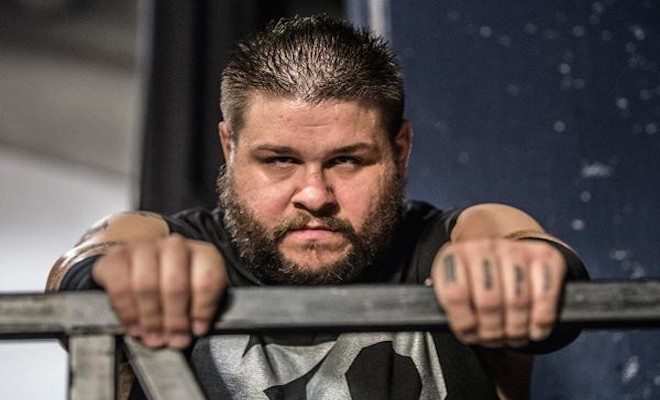 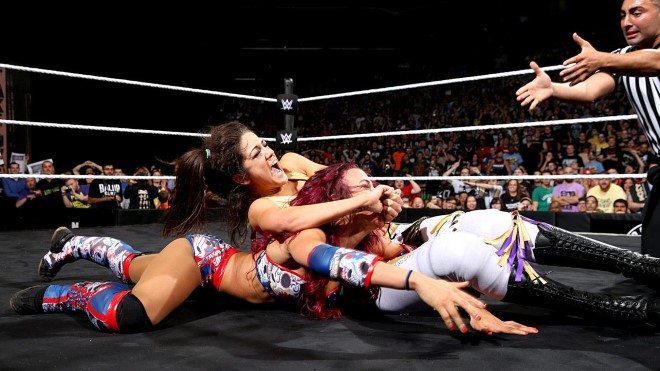 Sasha Banks vs. Bayley to Main Event Next “NXT TakeOver”