It’s a title show this week as Finn Balor gets a shot at Roman Reigns and the Universal Title. That sounds like something that could headline Extreme Rules so we may be in for some shenanigans. Other than that, we need to get some things going for the pay per view, which is in just over three weeks. Let’s get to it.

We open with a recap/hype video for Roman Reigns vs. Finn Balor.

Here are the Usos for their Championship Contenders match against the Street Profits. Before we get started, the Usos talks about how the Profits disrespected them last week so come get them because they are the ones.

Non-title. Hold on though as the Street Profits want to know how the Usos are in the ring without their permission slips. Ford admits the Usos are spitting facts and they are the ones. As in the ones about to take a beating. The Usos take the Profits down to start but Jimmy takes too long talking trash and gets caught with a dropkick from Dawkins. Ford comes in for a dropkick of his own, plus one to Jey. A quick shot from the cup sets up Ford’s dive off the apron, which is pulled out of the air for a drop onto the barricade as we take a break.

Back with Ford fighting out of a chinlock and avoiding a charge to send Jimmy shoulder first into the post. The hot tag brings in Dawkins but Jey catches him with a Samoan drop for two. Both Usos take Dawkins up top but he fights his way to freedom and gets over for the tag to Ford. The Anointment sets up the Cash Out for two with Jey making the save. Jey sends Ford into the post twice in a row and that’s a DQ at 7:56.

Result: Street Profits b. Usos via DQ when Jey sent Ford into the post (7:56)

Post match the Usos come after them again and take Dawkins outside. That’s fine with Ford, who hits a SCARY dive over the top, nearly landing on his head and scaring commentary. Thankfully he’s fine enough to get onto the announcers’ table for the posing.

Roman Reigns is watching in the back and sends Paul Heyman to do something.

Heyman is walking when Kayla Braxton scares him. He suggests she enjoy the moment but Heyman’s phone rings…with Brock Lesnar’s theme as the ring tone. Heyman says there comes a time….and it rings again. He answers and tries to say this is a bad time but gets cut off by someone presumably yelling on the other end. Heyman says he’ll do it and gets hung up on. Braxton says she is definitely enjoying this moment, as Heyman told her to. Heyman goes to a janitor and says if he wants to take out the trash, start with Braxton. It’s Big E., who laughs maniacally as Heyman looks like he wants to cry.

Here is Becky Lynch for a chat to a heck of a reaction. After a recap of Bianca Belair becoming #1 contender to the Smackdown Women’s Title, Becky talks about knowing how everyone wants to rub elbows with her. Bianca Belair isn’t happy about Becky winning the title at Summerslam but it isn’t Becky’s fault that “ESTher” wasn’t ready. Belair can do all of her flips, but it took one flick of Becky’s fist to become Smackdown Women’s Champion again.

Cue Belair to say she never complained about losing, but last week she proved she is the EST around here when she won the four way. Roman Reigns is defending his title tonight so Becky can do the same. Becky doesn’t care what Reigns does because the match isn’t happening tonight.

Dolph Ziggler introduces himself to Toni Storm and offers her a front row seat…in his corner. Storm says he’s great but she is rooting for Rick Boogs tonight.

Becky Lynch tells Adam Pearce and Sonya Deville that the match isn’t happening tonight. That’s fine with the two of them, as the match can take place at Extreme Rules. Next week, it’s the contract signing at Madison Square Garden.

Seth Rollins talks about how he has watched his match with Edge so many times now and it is time to renew himself like a fine wine.

Cesaro starts fast by sending him outside for a whip into the barricade. Back in and Rollins hits a quick dropkick into an Impaler DDT (ala Edge) for two as we take an early break. We come back with Cesaro hitting an uppercut but getting countered into the Buckle Bomb for two. Cesaro fights back again so Rollins grabs the Edge O Matic for two more.

The Stomp is countered into a powerbomb to give Cesaro a breather and he’s back up with a discus lariat for his own near fall. There’s the Swing into the Sharpshooter but Seth is right next to the ropes. They head outside with Cesaro loading up the running uppercut but Rollins grabs a chair for the DQ at 9:43.

Result: Cesaro b. Seth Rollins via DQ when Rollins used a chair (9:43)

Post match Rollins snaps and puts Cesaro in the Crossface with the chair bar over the mouth ala Edge. The Stomp leaves Cesaro laying. Rollins loads up the Conchairto but Edge runs in for the save.

Roman Reigns tells the Usos to stick to the game plan. They leave so Paul Heyman says they have a problem. Reigns isn’t worried but Heyman says they have a problem with Brock Lesnar. Reigns: “No, YOU have a problem with Brock Lesnar.” Heyman says Lesnar is going to be in Madison Square Garden next week on Smackdown. Lesnar called him earlier for the first time in a year and is watching the show because FOX is really big in Saskatchewan. Reigns wants to now how Heyman knows where Lesnar is, because Lesnar might be here tonight. Heyman seems to panic.

Happy Corbin arrives and thinks the interviewer is the valet.

Edge thinks Seth Rollins has lost it but he would probably do the same. This has to stop though and Edge wants Rollins next week. This doesn’t end well (Edge’s words).

It’s time for the Kevin Owens Show, with Owens being happy about wearing a tie. Speaking of Happy, here is Happy Corbin as this week’s guest. As expected, Corbin is very happy to be here and says Owens not helping him is what made Corbin so happy in the first place. Owens wants no part of this but Corbin says he has his own special guest: Logan Paul.

Owens isn’t impressed as Corbin talks about how they’re friends now. They watched Logan’s brother Jake beat Tyron Woodley and then hung out together, which Owens thinks sounds horrible. Owens calls Paul trash so Logan offers him $100. That’s not going to work for Owens, who wants Paul out of WWE. They shove each other and Owens goes after him but gets dropped by a mic shot from Corbin. The beatdown is on and Owens is left laying.

We get a notification that Carmella….exists I guess. Liv Morgan is standing nearby and says “really”.

Dominik starts fast with the top rope armdrag but Zayn blasts him with a clothesline. There’s a running hurricanrana to send Zayn into the ropes but it’s too early for the 619. Zayn goes to leave but here’s Rey to cut him off in a hurry. Cue Rey Mysterio to keep Zayn from leaving and Dominik hits the big flip dive. Dominik wants Rey to leave and the distraction lets Zayn hit the Helluva Kick for the pin at 2:04.

Naomi comes up to Sonya Deville to find out what she’s doing tonight. Sonya is on the phone though and tells Naomi to get with her next week.

Finn Balor wants to know what would have happened if he had not gotten hurt the night he won the Universal Title. Tonight, he gets to find out.

Balor is challenging, but here are the Usos to jump him before the bell. The big beatdown is on and Balor is left laying until the Street Profits come in to chase the Usos off. Reigns comes out for the match and we take a break. Back with Balor saying he can go so we get the Big Match Intros. Reigns is smart enough to throw Balor down onto the bad ribs to start as the ribs are banged up again. Balor tries to fight back but charges into an uppercut. A spinebuster plants him again and we take a break.

Back with Reigns missing the Superman Punch, allowing Balor to hit a Pele for a breather. Balor starts the comeback but gets sent outside to cut him off again. Reigns gets pulled down into the ring skirt though and Balor hammers away, including the big flip dive. They head back inside where the Coup de Grace misses, allowing Reigns to hit the Superman Punch for two. Balor is back up with 1916 for two of his own and the Coup de Grace connects for a VERY close two. The kickout includes a low blow and Reigns hammers away on the downed Balor, setting up the guillotine choke to retain at 10:31.

Post match Reigns and Heyman go to leave, but the lights flicker a bit. Reigns isn’t sure what that was to end the show. 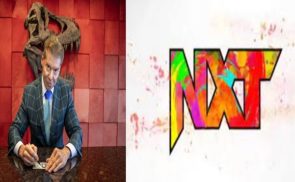 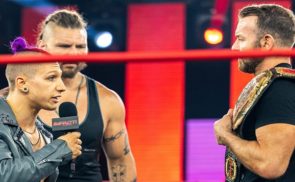