Things could get interesting around here again as we have the fallout from Clash of Champions, as well as what happened last night. That means a lot of Baron Corbin as he is officially crowned as King of the Ring, though I’m not sure where that could be going. Other than that, we’re less than three weeks away from the next pay per view and need a new challenger. Let’s get to it.

Big E. immediately throws Dash with a belly to belly and follows it up with the apron splash for two. Dawson comes in and gets elbowed in the face by Woods to stagger him rather well. It’s off to Orton, who gets knocked down by everyone in a row, including the Warrior Splash from Big E.

The threat of Trouble in Paradise sends Orton outside and we take a break. Back with Dawson working on Woods’ knee and Orton coming in to stay on it. Woods chops away at Orton until a poke to the eye cuts him off. Dawson puts on a leglock before throwing Woods outside, where Orton drops him onto the announcers’ table.

We take another break and come back with Kofi hitting SOS on Orton but Dawson makes the save. Wilder hits a tornado DDT to plant Woods on the floor, leaving Orton to hit the hanging DDT on Kofi. The super RKO is broken up though and Kofi DDTs both Dawson and Wilder. Woods’ rope walk elbow hits Dawson to send him outside, followed by Trouble in Paradise to finish Dawson at 17:30.

Post match here are Paul Heyman and Brock Lesnar with Heyman doing his intro and Lesnar making him get in the ring to say it. Lesnar is here to stand in the way of Kofi’s title reign because it’s a bad day for the New Day, yes it is. The challenge is made for October 4 on the first Smackdown on FOX. Kofi accepts and it’s an F5 from Lesnar.

Sasha Banks accepts Becky Lynch’s challenge for a match inside the Cell because she has been inside one before. Tonight, she’s beating Charlotte.

We look back at Luke Harper returning at Clash of Champions to help Erick Rowan beat Roman Reigns.

Michael Cole sits down with Rowan, who doesn’t want to talk about Harper. Cole calls what Rowan tried with Reigns attempted manslaughter, so Rowan tells him to tone down his voice. Rowan is tired of being overlooked and doesn’t like Daniel Bryan saying they were intellectual equals. He is far superior to Bryan and everyone will learn to never disrespect him again.

Non-title and Sami Zayn handles Nakamura’s introduction. Before the match, Zayn talks about Ali beating Nakamura a few weeks back, but that was before Nakamura and Zayn joined forces. Ali will never be a champion, so the fight is nearly on. Zayn’s distraction lets Nakamura knee Ali in the head, setting up Kinshasa. No match.

Kevin Owens arrives and sits in the crowd. Shane McMahon is on his way to the ring to deal with this but gets served with papers. Shane isn’t happy with them and goes to the ring without saying anything.

Post break here’s Shane, with the papers, in the arena. He calls out some security but tells Owens to come into the ring. Security is ready but Shane tells Owens to come in and has security leave (Then why have them in the first place?). The papers are the largest wrongful termination lawsuit in history, saying that if he is fired, he will receive $25 million.

They argue over the merits of the case, with Owens saying that Shawn fined him for attacking Elias when Elias was serving as a referee. Then Shane did the same thing to him last week, after Owens swallowed his pride and tried to get rid of the initial fine. Owens knows that he needs to hit Shane in the wallet, which is what he is going to do. With this case, he’ll be able to tell Shane that he is fired for a change.

We get the same AOP vignette from last night.

Charlotte is in the back and Ric Flair is with her.

Multi-platinum recording artist Offset, wearing a Ric robe, introduces Charlotte. Bayley is here with Banks, who is sent into the buckle a few times to start. An early attempt to pull the turnbuckle pad off earns Bayley a glare so Banks posts Charlotte to take over as we go to a break.

Back with Charlotte hitting a fall away slam before grabbing a Boston crab. Banks makes it over to the ropes before her back is snapped, only to have Charlotte boot her to the floor. The moonsault takes out both Banks and Bayley and it’s time for the Figure Eight. Banks is screaming a lot but Bayley comes in for the DQ at 7:50.

Result: Charlotte b. Sasha Banks via DQ when Bayley interfered (7:50)

Post match the double beatdown is on but Carmella runs in for the save with superkicks. Bayley looks confused before getting kicked in the face as well.

Here’s Baron Corbin for his coronation as King of the Ring. He knows most people wanted ANYONE but him, but he thinks he can be a fair and firm king. If he has to, he will rule with an iron fist, but first he wants to honor Chad Gable. Cue Gable, with Corbin making short jokes during his entrance. People have been overlooking Gable for his entire career and last night, Gable came up short. Gable isn’t wasting time and tackles him through the throne, which is destroyed on impact. A shot with the scepter breaks that up and the destruction is on as Corbin bails. The robe is ripped up and the crown is stomped on for a bonus.

Otis now has regular trunks to show off the physique a bit more. Tucker gets taken into the wrong corner to start and it’s Dallas celebrating early. A roll over gets Tucker out of trouble and the hot tag brings Otis in. Some kicks to the stomach make Otis start dancing and it’s a corner splash to set up the Caterpillar. The Compactor finishes Dallas at 3:25.

We recap the Lesnar vs. Kofi segment.

Here’s Daniel Bryan for a chat. He hears the DANIEL BRYAN chants but points out that a lot of those same people were accusing him of being behind the attacks on Reigns. Bryan may be a lot of things, but he is not a liar. Rowan is still his friend, and here he is in person. Rowan doesn’t like what Daniel is saying, because it was always about Bryan. It makes Rowan feel disrespected so Bryan tells him to do something about it.

Cue Luke Harper to jump Bryan from behind and the beatdown is on. Roman Reigns comes out for the save but gets beaten down as well, including a powerbomb against the post. Security gets taken out and the announcers’ table is loaded up. A double spinebuster through the table destroys Bryan to end the show. 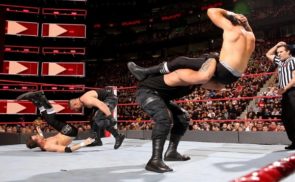 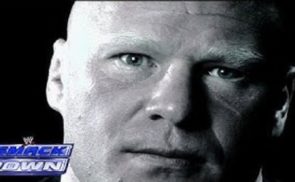