It’s the second night in New York and that means things are likely to still be hot but not quite as hot as things were last night. This time around we’ll be seeing the Undertaker making his regular appearance, but the more interesting development is a change to the King of the Ring. Elias is out with an injury so someone is going to be taking his place against Chad Gable, which could go a few different directions. Let’s get to it.

They’re not wasting time again tonight as here’s the Undertaker to get things going. Undertaker says that for the last thirty years, he has considered these hallowed halls his home. He doesn’t know how many more times he’ll be here but he wants people to remember the titans, the legends and heroes who were born and created here. Undertaker took a little piece of every one of their souls and now we usher in a new era of superstar.

Cue Sami Zayn to interrupt to say that Undertaker is in fact a legend. What is most famous about his career is what he has done in this arena (not exactly) because for the last thirty years, this arena has been his yard. Undertaker has been talking about paving the way for the future but what he doesn’t understand is that the future is here.

Zayn asks him to do the right thing and leave right now because the future is in good hands. Undertaker hands him the mic and Sami looks like a three year old getting his first bicycle. Then Undertaker turns around and shakes his head. The chokeslam (with Undertaker managing to fix his hat while Sami is airborne) leaves Sami laying.

Shane McMahon is watching from his office when Chad Gable comes in. So Elias has broken his ankle, but there won’t be a bye for Gable. It could be someone from Raw or Smackdown, and they might have already been eliminated.

The Miz vs. Andrade

Shinsuke Nakamura is on commentary and refuses to speak English. Miz armdrags Andrade down to start but it’s an early Tranquilo pose in the ropes. Andrade gets sent outside so Zelina Vega gets in a rake to the eyes so Andrade can stomp away back inside. We take a break and come back with Miz getting two off the Reality Check. The YES Kick misses so Miz is right back with a big boot.

Now the chops in the corner give us some WOOing, followed by a missed charge to send Andrade outside. Miz throws him at Nakamura but another Zelina distraction lets Andrade hit a Judas Effect for two. Back in and the double moonsault misses, allowing Miz to hit the Skull Crushing Finale for the pin at 9:53.

Shane asks Matt Hardy and Apollo Crews if they have seen Gable, who is right in front of him. Shane has found a suitable replacement who is Elias approved: himself.

Here are Mandy Rose and Sonya Deville to call Nikki Cross ugly. Apparently Nikki looks like a rat crawling out of the Lincoln Tunnel so here’s Alexa Bliss to interrupt. By that I mean point to the entrance so Cross can charge the ring and start her match.

Cross runs straight at Mandy and grabs a sleeper but Mandy slips out and hits a fall away slam. The chinlock doesn’t last long and Mandy charges into an elbow to even things out a bit. Nikki freaks out at the prospect of being sent into the corner but misses a high crossbody. Mandy misses a running knee though and gets rolled up for the clean pin at 3:20.

Ember Moon comes up to Bayley and complains about what Bayley did to Becky Lynch and Charlotte. Bayley did what she did for the division and the title.  They’ll have a match tonight.

Tucker wrestles Keaton to the mat with ease to start and then flips over him for a bonus. The gyrating Otis comes in for a splash and it’s time to take the straps down for the Caterpillar. The Compactor finishes Silver at 1:58.

Kevin Owens comes in to see Shane, who is considering rescinding the fine. That is, if Owens does his job well tonight. Shane hands him a referee shirt and smiles.

Here’s Rowan for a chat. What the people don’t understand is that no one controls him, but here’s Reigns to interrupt. The fight is on in a hurry with Reigns knocking him into the crowd. Rowan fights back though and grabs a fan, who he powerbombs over the barricade onto waiting security. They fight over the barricade and back to ringside, where Rowan swings a camera at Reigns to knock him down again before leaving.

Non-title with Charlotte on commentary. Bayley takes it outside early on and puts Moon on the barricade for a hard knee to the face as we take an early break. Back with Ember slugging away and hitting a dropkick for two. It’s too early for the Eclipse though and Ember has to roll through. The Bayley to Belly finishes Moon at 4:29.

We look back at Kofi Kingston getting beaten down by Randy Orton and the Revival last week.

Here’s Kofi Kingston, who is very happy to be in the Garden. It was ten years ago in this very building where he crushed Randy Orton through a table and was ready to become one of the biggest stars in WWE. We see a clip of the Boom Drop through the table in 2009 but here’s Orton in the crowd to call Kofi stupid. We hear about Orton’s accomplishments in the last ten years but none of that matters. All that matters is Orton winning the title on Sunday when he proves that Kofi is something he isn’t.

That’s what Kofi has done for years now, from the Jamaican accent to the dreadlocks to that Power of Positivity bull****. Kofi goes into the crowd after him but Orton is waiting on him with a chair. Kofi gets it away though and fights back, meaning it’s time to set up a table. Orton knocks him down though and puts Kofi onto the table. The chair is grabbed but Kofi kicks away from the table, which breaks anyway. Another table is loaded up and Kofi hits another Boom Drop before posing on the barricade.

Roman Reigns vs. Erick Rowan is now No DQ.

King of the Ring Semifinals: Shane McMahon vs. Chad Gable

Hang on though as Shane makes it No DQ and jumps Gable from behind before sending him over the barricade. Back from a break with Gable beating a ten count back in and managing a crucifix. Owens takes a long time counting the fall though and the fans aren’t pleased. Shane rolls Gable up for a fast counted two but Gable is back with a spinning kick to the head.

The perfect moonsault gets a delayed two, allowing Shane to snap Gable’s throat across the top rope. Shane’s torture rack neckbreaker gets two more and it’s time to bring in a chair. Kevin gets rid of it and the ankle lock goes on, complete with the grapevine, to make Shane tap for the win at 10:27.

As we hear that the King of the Ring finals are next week on Raw instead of at the Clash, Shane jumps Owens and fires him to end the show. 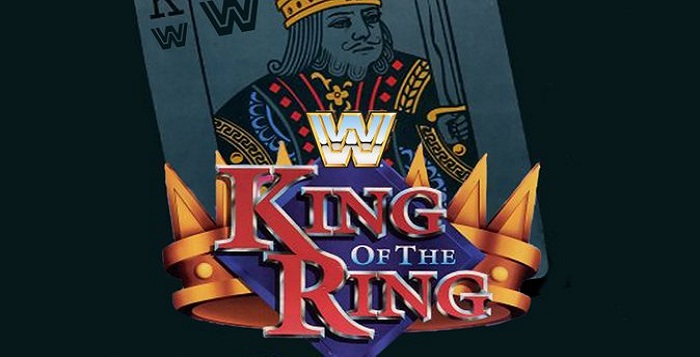