It’s time to start the build towards Survivor Series, but also the start of the Usos being Roman Reigns’ lackeys. That could go a long way in the short and long terms so I’m curious to see where it goes. Other than that, there isn’t a lot going on around here so maybe they can start something new. Let’s get to it.

Here are Roman Reigns and Paul Heyman to open things up with Jey Uso waiting in the ring. After a look back at Reigns beating Uso in the Cell match, Jey takes the mic from Heyman to say that he didn’t quit. Reigns says he told him so and that he made Jey quit like he promised. Jey can’t believe what Reigns did and says Reigns isn’t tougher than him. Reigns calls this the kind of thing that this is what you have to do to become champion.

The entire family, from the oldest to the youngest, is behind him and if Jey doesn’t do as he promises, he’s out of the family. He knows Jey wants to bash his skull in right now but what can he do. Jey looks near tears and shouts that he hates Reigns. Why does Reigns have to do this? Reigns knows Jey hates him right now but by the end of the night, Jey will fall in line.

Robert Roode is here with Ziggler, who gets Owens to chase him to start and stomps away back inside. Owens hits an elbow to the face so Ziggler kicks him in the knee. A missed charge puts Owens on the floor and Roode gets in a cheap shot from behind. The referee ejects Roode on suspicion of cheating (speculating isn’t fair) and we take a break. Back with Owens fighting out of an armbar but getting knocked down for two more.

Owens gets up again and catches a crossbody, which he spins around into something like a White Noise/Death Valley Driver hybrid. The Swanton hits knees but Owens blocks the Fameasser. The Pop Up Powerbomb is countered into a Fameasser (cool) for two so they go into a pinfall reversal sequence for two each. Ziggler’s superkick is countered into the Stunner for the pin at 10:29.

Video on Daniel Bryan, including the rise of the YES Movement.

Natalya asks Adam Pearce how the Survivor Series team is going to be made and suggests that she is the captain and picks the team. Billie Kay comes up with a combination head shot/resume but here’s Bianca Belair who is here to be captain. Natalya says no one cares and calls herself the boat. Belair: “That isn’t as cute as you think it is.” Pearce makes a triple threat qualifying match.

We get a sitdown interview with Lars Sullivan, who asks why he isn’t being called the Freak. Lars: “Would you like to be called the Freak?” Sullivan goes into a mini rant about being labeled a freak, but Corey Graves says all he meant was he isn’t capable of doing the physically freakish things that Lars is capable of doing. Lars: “I’ll accept that.”

Sullivan talks about being called a freak for the first time when he was nine or ten years old, because the Tracy Brothers were singing about him being a freak show. He didn’t know what to do so he cried. Everyone there laughed at him, even the teachers. The laughter stopped but the screaming never did. As for what he wants to do in WWE, his goal is to unleash all of his pain and humiliation on WWE and make this place his personal playground.

Bianca Belair comes out for her match…so let’s look at Seth Rollins vs. Murphy from last week with Murphy trying to make amends with the Mysterio Family to no avail.

Aalyah and Murphy are in the back. Her mom seems to approve of whatever makes her happy but Rey and Dominick don’t want her having anything to do with Murphy. He’s going to apologize to them tonight though so she takes his hand.

Billie goes to the floor to start so Natalya shoves Bianca and quickly finds out that was a bad idea. Belair backflips away from her and knocks Billie off the apron. Natalya’s discus lariat drops Belair so Billie can get two, followed by a hurricanrana to Belair. A basement dropkick cuts off Natalya and a handspring moonsault gives Belair two. Natalya’s springboard belly to back drop sets up a somewhat mistimed basement dropkick and the Sharpshooter goes on.

Billie adds a reverse chinlock at the same time and thank goodness Bianca didn’t tap. Billie kicks Bianca in the face to make her DDT Natalya and it’s time for back to back near falls each. The Sharpshooter has Billie in trouble for a good while until Belair makes the save. Natalya is sent into the post and Belair hits the KOD to finish Billie at 4:11.

Carmella snaps her fingers to get a bucket of champagne. She is that woman who calls her shots and makes her own rules. She is willing to do whatever it takes to get ahead because no matter what, she will always win. Next week, the entire world will know why she is untouchable.

A breast cancer survivor is in the virtual audience.

Here are Murphy and Aalyah, arm in arm, for a chat. Murphy says that as a man, he needs to apologize to Rey and Dominick face to face. Neither of them come out but here’s Seth Rollins instead. He knows that the Mysterios will never accept him but Rollins will always forgive him. Rollins can always accept Murphy, and he’ll accept Aalyah as well, no matter what her last name is. Cue Dominick to jump Rollins but Murphy pulls him off and goes after Rollins.

Dominick goes after Murphy as Rollins bails up the ramp. Rey comes in to help, but Aalyah gets in the way of the 619. She says she loves Murphy and Rey is distraught. He’s so upset that he speaks Spanish but Aalyah won’t go with them. Rey asks one more time for her to come with them but Aalyah kisses Murphy, which makes Rollins smile from the stage.

Daniel Bryan feels bad for what Jey Uso is going through but he’s ready for the best Uso tonight.

Here are the Street Profits for a match to thank the New Day for the imitation on Monday. New Day is a great tag team but at Survivor Series, they’re being served an L. They want the smoke.

Non-title. Dawkins blocks Cesaro’s hiptoss to start and shoulders Cesaro down. Ford comes in with the great dropkick and Dawkins belly to backflips Ford onto Cesaro for two. A running Blockbuster sends Cesaro the floor and Ford hits a big running flip dive onto Nakamura. Cesaro LAUNCHES Ford over the barricade though and we take a break.

Back with Nakamura kicking Ford in the ribs to set up a slingshot suplex. Ford gets in a shot for a breather so we can take another look at that toss over the barricade. The hot tag brings in Dawkins to clean house, including the spinning splashes in the corner. Another splash misses though and Nakamura hits a running knee to the ribs in the corner. Cesaro adds a gutwrench powerbomb for two with Ford making the save. The Anointment hits Cesaro and it’s a superplex into the Cash Out to finish Nakamura at 9:14.

Result: Street Profits b. Cesaro/Shinsuke Nakamura – Cash Out to Nakamura (9:14)

Sami Zayn is looking forward to facing Bobby Lashley at Survivor Series because Sami is a man of all of the continents. He is the people’s champion and the champion of the people because people love him from Bolivia to Lebanon to New Zealand to Botswana. They know he will never lie to them but Lashley only represents ONE country. At Survivor Series, Sami is going to show Lashley that the Intercontinental Champion is greater than the United States Champion.

Here is Sasha Banks, with the chair from Sunday, for a chat. She says you shouldn’t talk the talk if you can’t walk the walk and on Sunday, she walked the walk. That’s why she beat Bayley to become the new Smackdown Women’s Champion. Now that Bayley is in her past, she is ready for Survivor Series and Asuka because she is the best of the best. Cue Bayley to say Sasha knows she can’t beat Asuka without Bayley in her corner. That’s why next week, Bayley wants her rematch next week. Bayley: “Trick or treat. Ding dong, the title reign is dead.” Sasha says it’s on.

We get a preview of the 30 Days Of The Deadman special.

Jey doesn’t look happy, even as he shoulders Bryan down to start. Bryan is back with a wristlock but Jey knocks him into the corner. That just earns him the moonsault over Jey into Bryan’s running clothesline, followed by the YES Kicks. Jey gets knocked outside and here are Reigns and Heyman, sending Jey into quite a bit of anger as we take a break.

Back with Bryan hitting a running dropkick into the Tree of Woe. Jey slips out and starts kicking away but the Superfly Splash hits knees. The LeBell Lock goes on until Jey gets to the rope to save himself before too long. The running dropkick connects in the corner but Jey is right back with a superkick. Now the Superfly Splash can connect for the clean pin at 9:42.

Post match Reigns comes to the ring, where Jey says he’s with him. Jey acknowledges Reigns a the head of the table and superkicks Bryan, setting up another Superfly Splash. Jey shouts about understanding now and says he loves Reigns too. Reigns points to Bryan and says make him understand. Jey takes Bryan outside and puts him onto the announcers’ table for another Superfly Splash. Reigns looks happy as Jey hammers away to end the show. 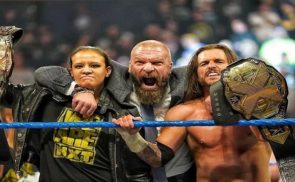 Two Reasons Why NXT Is Not Involved With Survivor Series 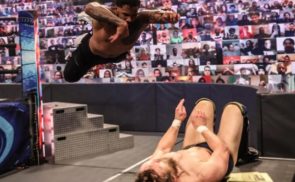