With less than a week before the big show in Australia, most of the card is set. Tonight you can expect a heavy dose of Miz vs. Daniel Bryan, as the other Smackdown main event of AJ Styles vs. Samoa Joe is all but set. That won’t stop WWE from talking about the Raw matches non stop though, as Undertaker vs. HHH is by far and away the real main event. Let’s get to it.

Here’s Paige to open things up. She talks about how serious everything is between AJ and Joe at the moment and we see a clip of what happened last week as Joe went to AJ’s house. Paige says nothing happened as authorities were called and got there in time. Now that brings us to tonight, where Joe has been charged with trespassing and should be fired, but AJ doesn’t think so. AJ wants to get his hands on Samoa Joe instead and he’s dropping the charges.

The match is on, and here’s a clip from AJ, who is at his house instead of at the show. He’s not in the right frame of mind to perform tonight because this is bigger than WWE. AJ is at his house tonight and is staying there until he knows Joe is on a plane to Australia. He needs to be there because his kids are waking up in the middle of the night, checking their closets for Uncle Joe. This has to end because Joe isn’t leaving the land down under. AJ is going to bury him alive.

The women start things off with Vega throwing Carmella down and mocking the moon walk. That earns her a dropkick so Carmella can show us the real thing, followed by some shouting. Something like a crucifix hold over the middle rope keeps Carmella in trouble and it’s off to the men so we can get the Almas/Vega tranquilo pose.

Truth and Carmella do their own shared splits pose before scaring Vega and Almas to the floor. We pause for the dance break until Truth falls for a distraction, allowing Truth to stomp away. A missed running knee puts Almas on the floor though and we take a break. Back with Truth hitting a leg lariat for a double knockdown.

The diving tag brings in Carmella for her clotheslines and an atomic drop, which feels like a rare thing these days. There’s the Bronco Buster in the corner, followed by a Flatliner for two. Carmella isn’t pleased with Almas for making the save so she tries a superkick on him instead. Truth clotheslines Almas to the floor and hits a dive, leaving Vega to roll her up for two. The Code of Silence makes Vega tap at 9:54.

Tye Dillinger tells Paige that he wants Randy Orton but she points out the lack of Jeff Hardy since his match with Orton. Paige: “I will never understand men.” The match is made for tonight.

Here’s New Day and it’s time for the debut of their cooking show. Big E. tries to thank ICOPRO for sponsoring them but Woods cuts him off to talk about their title match against the Bar in Australia. Kofi thinks that means they need a strong dose of positivity, so they introduce their pancake chef. Tonight we’re going to learn his special recipe but here’s the Bar to interrupt. Sheamus introduces Cesaro, who knows a thing or two about making pastries.

Apparently he’s known as Chef back home, but Sheamus knows a better way to bake things. The table is turned over and the fight is on with Sheamus throwing flour into Kofi’s face to break up the Midnight Hour. Big E. goes shoulder first into the post and a double backbreaker hits Kofi. That’s not enough though as they fill in the chef’s hat with batter and put it back on his head. The rest is poured over him.

Dillinger jumps him in the aisle and the referee waits on the floor as the fight heads inside. A clothesline puts Orton on the floor and Tye drops him back first onto the announcers’ table. Orton hits him with the steps before putting Tye’s finger inside the hook that connects the turnbuckle to the post. The finger is bent around and Tye is in trouble until Orton finally lets it go. No match.

The Miz gives Shelton Benjamin a pep talk before Benjamin faces Daniel Bryan tonight. Apparently Miz got him the match but Shelton doesn’t seem impressed. Miz keeps talking about what Benjamin needs to do tonight until Shelton is all fired up, saying that this is the chance he’s been waiting for. They do shake hands though.

Aiden English wants the production truck to be ready to show his video about what happened with Lana in Milwaukee.

Here are Rusev and Lana to see this video. Rusev doesn’t like hearing something like this about his wife and now he wants to tear English apart. English comes out and says he has the evidence, but first: some backstory. Milwaukee is the largest city in Wisconsin and borders two of the Great Lakes. Lana says he’s stalling but English goes on to talk about the films and TV series that have been filmed in the city.

English finally shows us the clip, which is him in his hotel, practicing his song into the camera. Lana comes in to say she wants him. That’s the end of the clip, though English says there’s more that he’s not allowed to show. English is also considering an offer from TMZ and he wouldn’t want to, ahem, CHEAT ON THEM. Rusev charges up the ramp and chases English off.

We see a clip of the end of last night’s show with the Brothers of Destruction beating up HHH and the suddenly bald Shawn Michaels.

Post break, Rusev hunts English when Lana cuts him off. He says they’re not doing this here and walks away, leaving Lana looking distraught.

Whoa, a match. Miz is on commentary as Shelton runs Bryan over to start. A gutbuster gives Benjamin two as Miz talks about the opportunities he’s given everyone over the years. Bryan gets in some right hands and slaps on the YES Lock, sending Benjamin straight to the ropes. They head outside with Benjamin whipping Bryan’s ribs into the barricade and apron over and over to Miz’s delight.

Back from a break with Bryan missing the Swan Dive and getting caught in a bearhug. Bryan finally drives him into the corner and hits a running dropkick, only to eat a running knee to the ribs. A bridging German suplex gives Benjamin two but he misses the Dragon Whip. Bryan loads up the running knee but has to knock Miz off the apron. Paydirt gives Benjamin the big upset at 9:12.

Post match Miz wrecks Bryan even more, including dropping the ribs on the announcers’ table and hitting the Skull Crushing Finale.

Clip from Raw of the Shield being taken out by Braun Strowman and company.

Naomi is in the ring for the Susan G. Komen video. Some women from the organization and cancer survivors are here, including Dana Warrior.

Before the match, Peyton and Billie Kay debut their Aussie Floss dance. Graves: “I’ve got nothing on that one.” Joined in progress with Asuka getting kicked in the ribs until a rollup gives Asuka two. A middle rope dropkick misses to give Peyton two more and we hit the chinlock. Back up and Asuka hits the middle rope dropkick for two of her own, followed by a kneebar into an ankle lock. Naomi and Billie cancel each other out, leaving Asuka to win with the Asuka Lock at 3:34.

Here’s Becky Lynch for her surprise before Saturday. Becky talks about how she’s learned you can’t be nice around here without getting stabbed in the back. We get a clip of the history of Lynch and Charlotte, which only makes the fans cheer for her all the more. Becky wants to know where her new action figure or magazine covers are while she has to watch Charlotte get a photo shoot. Becky has a new poster of Super Show-Down, featuring Becky standing over Charlotte and holding up the title. Cue a ticked off Charlotte to spear Becky and put her in the Figure Four over the apron. Becky limps off to end the show. 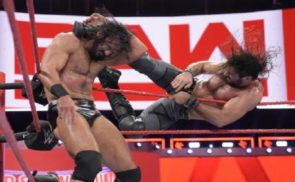 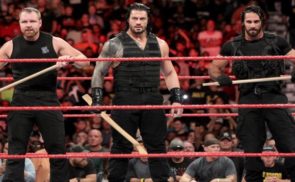