It’s the go home show for Wrestlemania Backlash and that means we need to hype up the six man tag which totally serves some kind of a purpose. I’m not quite sure what that purpose is but I’m sure it’s there. Other than that, it might be time to add one or two more matches to the card. Let’s get to it.

Before the match, Charlotte says Aliyah quit last week and now it is time for her to get rid of Ronda Rousey for good on Sunday. Charlotte wouldn’t be surprised if Rousey left WWE for good after she gives up. As for Aliyah, a single shot takes her down but here is Rousey for the save. The brawl is on with referees and agents (including Jamie Noble, who has McAfee VERY excited) eventually….not actually being able to keep them apart as Rousey charges at her again. They’re finally separated with no match of course.

Naomi (injured) and Natalya are here too. Banks (in a hairband) starts fast and goes right after the arm but can’t hit the stomp. Baszler gets in a shot of her own though and hits the gutwrench suplex. The stomping is on in the corner to keep Banks in trouble and a side slam takes her down again as we go to a break. Back with Banks fighting out of an armbar and sending Baszler outside for a ram into the announcers’ table. Back in and Banks gets two off the Meteora as Natalya is losing it on the floor. Banks tries a small package but Baszler reverses into one of her own and grabs the rope (with Natalya helping) for the pin at 8:15.

Post match Natalya goes after Naomi as Baszler loads up the Future Endeavored Stomp (McAfee’s words) but Banks fights up and makes the save.

Video on the Bloodline vs. Drew McIntyre/RKBro.

RKBro isn’t that impressed with the Usos and are coming for them on Sunday.

It’s time for Happy Talk and we get a recap of Happy Corbin vs. Madcap Moss. Corbin doesn’t think much of Moss, who pops up on screen and mocks Corbin for being a charity case, as he lets tattoo artists try out their bad ideas on him. Corbin tells him to come say this to his face so here is Moss to interrupt. Moss talks about the various versions we have seen of Corbin over the years, but we haven’t seen him ever be entertaining. Remember the Lone Wolf? Well wolves have hair, so maybe Corbin can be the BIG BALD WOLF! That’s enough to make Corbin….walk off without doing anything.

Video on Drew Gulak’s recent attempts at getting various jobs in WWE.

Gulak is back in the ring against a mystery opponent and it’s…..Gunther. An early armbar has Gulak in trouble and a chop makes it worse. The big boot sets up another chop and there’s the chop in the corner. Gunther grabs the sleeper and it’s a powerbomb for the pin on Gulak at 1:59.

We look back at Rick Boogs getting injured at Wrestlemania, plus Roman Reigns taking out Shinsuke Nakamura.

Nakamura doesn’t like the Bloodline and promises to get a piece of Roman Reigns. Sami Zayn is watching from behind a truck.

Drew McIntyre is ready for Sunday but thinks Roman Reigns needs to get his head kicked off tonight.

Tables match. It’s a brawl to start, with Woods diving onto Holland on the floor. New Day grabs a table to hit Sheamus in the ribs but setting the table up takes too long. Holland is back up for the save but Woods breaks up a powerbomb through the table. That lets Kofi go onto the post for the HUGE dive off the top to send Sheamus through the barricade as we take a break.

Back with Sheamus and Holland both hitting their ten forearms to the chest. Kofi manages an SOS but gets dropped on the apron to cut him off. Woods strikes away at Holland back inside but has to knock Sheamus off the apron. Sheamus pulls Woods off the top to save Holland so Kofi takes Sheamus down with a hue dive. The announcers’ table is loaded up but Kofi has to slip out of an Alabama Slam attempt. With Sheamus on the table, Woods goes up but Butch comes out from under the ring for the save. Woods is put through the table for the win at 12:31.

Result: Sheamus/Ridge Holland b. New Day – Powerbomb to Woods through a table (12:31)

Post match Butch has to be pulled off of Woods.

Paul Heyman thinks Kayla Braxton is flirting with him and wants to be taken out for pizza in New York. Sami Zayn comes up and asks Braxton to leave so he can talk to Heyman (Heyman: “DON’T LEAVE ME ALONE WITH HIM!”). Sami talks about how Shinsuke Nakamura hasn’t forgotten anything and as a locker room leader, felt Roman Reigns should know. Heyman agrees to tell Reigns, but this might not be trustworthy.

Post break, Zayn asks Adam Pearce for a match with Nakamura next week. Pearce says they can just do it now instead.

It’s time for Chapter 5 of the Lacey Evans Story, as she talks about her father and some family members overdosing before she became a wrestler. Then she decided that she needed to do something with her life. She had her first match in front of her daughter and now she wants to know who can stop her. Soon, she is going to be the Smackdown Women’s Champion.

In the arena, the announcer tells us that Lacey Evans is about to come out here, but wants the proper respect with some applause. Cue Lacey, who celebrates with some fans and then leaves. End of segment.

Feeling out process to start until Zayn knocks him into the ropes. A running kick to the chest cuts that off and Nakamura adds a standing version to stagger him. The Kinshasa is countered into a Michinoku Driver to give Zayn two and we take a break. Back with Sami hammering on Nakamura for two and yelling at the official over the count.

Nakamura gets two of his own off a running knee and the cross armbreaker goes on. Zayn is able to stack him up for two so Nakamura hits a kick to the head. They head outside where Zayn tries to run again but Nakamura isn’t letting that happen. Instead Zayn hits a quick Helluva Kick to beats the count back in at 9:12.

Here are Drew McIntyre and RKBro (who might be combined to become RK McBro) for a chat. Before they call out the Bloodline, Riddle asks what the other two acknowledge. This includes McIntyre and Orton’s history against each other, and that Orton has muscular legs. Orton says he acknowledges that the sky is blue and the grass is green, with McIntyre saying it’s a joint decision. They call out the Bloodline and get what they want, with the brawl being on. The Bloodline is cleared out to end the show. 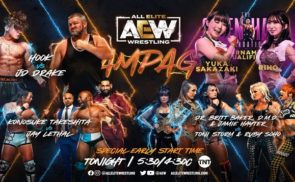 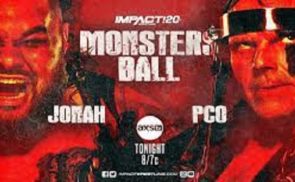