We’re less than two weeks away from Elimination Chamber but you might not realize it around here. There has not been a single Smackdown match announced for the show but that might be changing this week. Roman Reigns apparently has a big announcement and that could be a good thing. Seth Rollins is back too so let’s get to it.

Here are Roman Reigns, Jey Uso and Paul Heyman for a chat with Adam Pearce, who is already in the ring. Reigns tells Pearce that he isn’t waiting on him so let’s get on with this. Pearce doesn’t call any shots around here and Reigns isn’t waiting on Pearce or Edge. Reigns knows that Edge hasn’t announced his Wrestlemania match because he knows Reigns will beat him all the way onto a Legends contract.

Pearce seems to laugh it off but Heyman asks what he’s going to do about it. Fire Reigns this close to Wrestlemania? Last year’s show didn’t have Reigns and it was the lowest attended Wrestlemania of all time. Pearce says it’s time to start the qualifying process, and there are going to be two names who don’t need qualifying matches. Those would be Jey Uso and Kevin Owens, the latter of whom has Reigns outside the ring and in Pearce’s face. Reigns doesn’t think Pearce gets this but Heyman says it’s going to be on Reigns’ time.

Post break Pearce is freaking out over having to get all of the qualifying matches together but Sonya Deville has an idea: a tag team qualifying match with the winning team both getting into the Chamber. Pearce likes the idea, which is good because Sonya has already booked it.

Commentary confirms that the winner of the Chamber match will face Reigns that night.

Before the match, Sami talks about how he and Corbin don’t get along but tonight they’re working together so WWE can’t give the Mysterios the spots in the Chamber. Rey and Dominik start fast by sending them to the floor for the double dives and we take a break. Back with Dominik rolling Sami into the corner and hitting a running elbow. Sami is right back with the Blue Thunder Bomb for two and it’s off to Corbin. Everything breaks down and the double 619 hits Corbin, with Rey taking him to the floor. That leaves Dominik to be suplexed into the corner, setting up the Helluva Kick for the pin at 7:33.

Dolph Ziggler and Robert Roode come in to see Deville and Pearce. They want in the Elimination Chamber, and are even willing to be in different pods. Sonya gives them a chance, in another tag team qualifying match, against Cesaro and Daniel Bryan.

We look back at Bianca Belair talking to Sasha Banks last week when Carmella and Reginald interfered, earning Reginald a whipping.

Reginald brings Sasha Banks some wine but Banks isn’t buying it. She takes the drink anyway and keeps talking to Kalisto.

Here’s Big E. for a chat. He is going to be a fighting champion and, after a Gorilla Glue reference, he mentions being past the Apollo Crews chapter….and here’s Crews to interrupt. Crews accepts the challenge, but Big E. was going to issue the challenge to anyone here except Crews you see. Big E. was looking forward to Michael Cole accepting the challenge but Crews implies Big E. is scared. Big E. lowers the mic and says he has beaten Crews time after time so go back to catering and get your paycheck. Crews gets in his face and a lot of arguing ensues, with Big E. saying they’re done so bring out the next challenger.

Nakamura is challenging and Big E. powers him around to start. That earns him some kicks down and the champ is in some trouble. It’s already time for the Kinshasa but Big E. pulls him into the Big Ending. That’s broken up and Nakamura kicks him in the back of the head. Another Kinshasa is loaded up but Crews runs in to dropkick Big E. for the DQ at 3:24.

The locker room comes to the ring for Rollins’ return. After a break here’s Rollins, with BURN IT DOWN again. He’s still in the suit with the one glove though so I’m getting mixed messages here. Rollins is glad to be back and knows that things have changed since he sacrificed himself at Survivor Series. The thing that has changed the most though is him though, because he has become a parent for the first time. He is now the father of a beautiful, perfect baby girl, who has changed his life in ways he never dreamed of.

Rollins sees the talent around here and he wonders where he fits in. Now he knows where that is: Rollins is the great leader that Smackdown needs to push it into the future. Leadership isn’t about what they can do for him but what he can do for them. Everyone walks out as Rollins talks about being a leader and a mentor. Rollins says all you have to do for a better Smackdown is embrace the vision. The lights come back up and he realizes that only Cesaro is left at ringside. Then Cesaro shakes his head and leaves as well, only to have Rollins run to the floor and chop block him. The beatdown is on until referees break it up.

Video on the Elimination Chamber.

Ruby Riott is here with Morgan, who starts fast and hammers away. Bayley misses a clothesline and Morgan hits a middle rope dropkick to the floor, meaning it’s time for a trip to the floor. A dive off the steps takes a bit too long for Morgan and Bayley sends her hard into the barricade instead. Back in and Bayley hits a shoulder breaker to rock Morgan but it’s an enziguri to give Morgan two. Cue Billie Kay to offer Riott her resume, which Riott throws away. The referee gets rid of them though and it’s the Rose Plant to finish Morgan at 3:45.

The Street Profits were at Daytona Motor Speedway this week.

During the entrances, the Profits say they want the titles back and Otis/Gable train for the smoke. Gable takes Dawkins to the mat to start but Dawkins manages to reverse. They send each other into opposite corners for a standoff so Ford comes in instead. An armdrag into an armbar has Ford flailing around but it’s back to Dawkins to take Gable down. That doesn’t last long as Otis gets the tag and starts to throw Profits around. Ford low bridges Otis to the floor to break up a clothesline though and it’s the Cash Out to finish Gable at 4:50.

Here’s Sasha Banks to talk about Wrestlemania. She has been dealing with Bianca Belair, who is like a little sister. Cue Belair to say Banks isn’t the boss of her. Those are fighting words so here are Nia Jax and Shayna Baszler to interrupt. Jax can’t believe how big their egos are and asks Shayna if she cares about Belair’s pick. Belair shows us the MY HOLE clip from Raw so the brawl is on. Baszler is knocked down so Jax is tripped onto the apron, meaning she has to stop herself from shouting about….well you get the idea. Belair and Banks take out Baszler as well and the two stand tall.

Non-title. Ziggler takes Bryan down for an early two but Cesaro comes in for a double slam. It’s off to Roode, who has to avoid the YES Lock, and gets sent outside. Cesaro is right there and is whipped into the steps. Sami Zayn and King Corbin come out to watch and we take a break.

Back with Bryan in trouble as Roode snaps off a suplex for two and hands it back to Ziggler. Bryan takes Ziggler down but Roode decks Cesaro, allowing Bryan to grab a rollup for two. Roode’s spinebuster gets two more on Bryan but Ziggler misses a charge in the corner, allowing the hot tag to Cesaro. Everything breaks down and Bryan hits Roode with the running knee. The Fameasser gets two on Cesaro but he’s right back up with the Swing into the Sharpshooter to make Ziggler tap at 11:04.

Post match Jey Uso, Sami Zayn and King Corbin all come in for the brawl. Everyone goes at it until Kevin Owens runs in for the Stunnerfest. Roman Reigns watches from the back as Owens sits down, saying that he’s coming for Reigns to end the show. 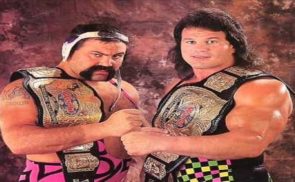