It’s the go home show for Summerslam and for once, the show is actually tomorrow night. I wouldn’t expect much in the way of wrestling tonight, but the talking should be more than enough to make something interesting. John Cena and Roman Reigns are here and that should be about all you need. Let’s get to it.

Here is Edge to get things going. After a video on Edge vs. Seth Rollins, Edge is sitting in a chair to talk about how Rolling teased stomping him back in 2014. Edge knows that the stomp could end his career and his way of life. It’s true that Rollins is an all time talent, but Rollins has driven him to a place where his blood runs black. Edge can see clearly on this day, and he knows that he has to break and humble Rollins. At Summerslam, Edge is going to burn him down.

Dominik Mysterio is all fired up but Rey Mysterio wants him to calm down and stay focused. That’s cool with Dominik.

Jimmy Uso and Dominik Mysterio are at ringside. Feeling out process to start until Rey gets him into the corner for some right hands to the face. Jey comes back with an uppercut to drop Rey and the chinlock goes on. Rey fights up and hammers away with a long string of right hands to put Jey on the floor. The dive takes both Usos out and we take a break.

Back with Jey hitting a Samoan drop for two as the pace slows down. Rey manages a quick hurricanrana for two and the springboard crossbody connects for the same. Jey drives him hard into the corner though and a pop up neckbreaker gets two more. Back up and Jey tries a powerslam but gets reversed into a tornado DDT. Rey tries a sunset flip but Jey grabs the rope, meaning Dominik tries to cheat like last week. This time he’s caught for an ejection so Jey gets in a cheap shot. The Superfly Splash finishes Rey at 11:27.

We look back at Baron Corbin stealing Big E.’s Money in the Bank briefcase last week.

Corbin still has the briefcase. It’s a brawl to start with Owens punching him down and hitting the quick backsplash. That’s too much being down for Corbin, who pops up with a right hand and the slide under the ropes clothesline. Owens is right back by superkicking him to the floor for the Swanton off the apron but Corbin snaps his throat across the top. The chokeslam and Stunner are both countered and here is Big E. go to after the contract. First he goes after Corbin though and that’s a DQ at 4:09.

Post match, Corbin gets away with the briefcase again.

Bianca Belair looks at a clip of last week’s beatdown and is ready to beat up Carmella and Zelina Vega tonight. Sasha Banks is next.

Non-title.  Tamina knocks Shotzi into the corner to start and it’s off to Natalya to hammer away. A hair takedown into a suplex gives Natalya two and we hit the chinlock. That’s broken up and everything breaks down with Nox diving onto Tamina. Natalya tries the Sharpshooter but Shotzi reverses into a small package for the pin at 2:59.

Here is Seth Rollins, in a white suit and tie, to respond to Edge. Rollins mocks what Edge said earlier and wants Edge to listen to him: there is no shame in being a family man and there is no shame in not being able to find the darkness that once guided you. Without that darkness, Edge cannot get on Rollins’ level. The lights go out…..and the BROOD theme song starts playing. Edge pops up on screen to say Rollins will never see it coming, followed by black goo falling from the ceiling to cover Rollins’ suit.

Ford is in new gear here and looks more like a boxer. A shot to the face gets on Otis’ nerves so he knocks Ford HARD to the floor to take over. Back in and Ford gets in another quick right hand and a high crossbody gets two. Otis blasts him with another clothesline and the Vader Bomb finishes Ford at 2:47.

This is Boogs’ in-ring debut. Boogs takes Crews down to start and uses his leg as a guitar. Back up and Boogs gets sent shoulder first into the post to give Crews two. It’s off to Azeez (who jumps over the top) and Nakamura, who kicks him in the face. A side slam drops Nakamura though and it’s back to Crews. That’s a kick to Crews’ head and it’s Boogs coming back in for pumphandle slam and the pin at 3:42.

Non-title and Carmella is at ringside. Belair runs through her to start but a quick backslide gives Vega two. You don’t do that as Belair muscles her up and then drops her, setting up the KOD for the pin at 1:26.

Non-title. Carmella goes after the downed Belair and talks a lot of trash. The abdominal stretch goes on….until Belair powers her way out and muscles her up into the delayed vertical suplex for two. The standing moonsault gets two more and it’s a spinebuster into the KOD to finish Carmella at 3:55.

Here are John Cena and Roman Reigns, with Paul Heyman, for the big ending. The place goes coconuts for Cena and Reigns says he knows the fans care. Reigns: “Go ahead, pop.” Reigns can’t believe that Cena believes he can beat him 1-2-3. Heyman says that no one has ever beaten this version of Reigns and Reigns says Cena isn’t doing it either. Cena isn’t letting it go this way and grabs the mic, saying that a month ago, everyone said Cena is going to make a movie after Reigns beats him.

The movie is real but Cena losing isn’t. It’s the Summer of Cena and he is here to demote Reigns. Everyone wants Cena to acknowledge him but it’s been the same for twenty years: Never Give Up. All it takes is Reigns to make a mistake and it’s 1-2-3. If Reigns isn’t perfect it’s 1-2-3 and that means #17 for Cena. Tomorrow the impossible becomes possible thanks to Roman Reigns and all it takes is 1-2-3.

Reigns thinks Cena doesn’t get it because he should have smartened himself up. When people get in the ring with Reigns, he smashes them so hard that they can’t do it again. Reigns can go to Hollywood and do the whole nine out there. It’s getting a bit too emotional for Reigns though and says we should raise the stakes: either Reigns leaves the stadium as Universal Champion or he’s leaving WWE. The handshake….allows Reigns to lift him up for an AA but Cena reverses into a rollup for the 1-2-3 to end the show. 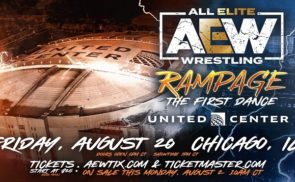