Somehow we’re ten days away from Hell in a Cell and it’s time to put the finishing touches on the build. The announced main event for tonight is hometown boy Dean Ambrose teaming up with the Dudleyz to fight New Day in a bit of a preview for the pay per view. We might even get more speculation of what Cena is going to do there as well. Let’s get to it.

Before the match, Bo talks about Reigns going to a scary place at the pay per view. Dallas knows all about scary places because he went to Suplex City, but he actually survived it unlike Reigns. Dallas actually takes him into the corner to start but Reigns drops him with a neckbreaker. A middle rope clothesline to the back of the head gives Bo an opening, only to have Reigns come back with even more clotheslines of his own. Dallas wants time and Reigns stops to smile, only to get annoyed when he takes a kick to the ribs. Now the Samoan drop connects and the two moves end Dallas at 2:58.

Roman talks about Bray referring to himself as the devil. He can get behind that idea because he sees the pure evil in Bray’s eyes. Roman is going to bring the big fight because it’s the only way to stop the devil. Cue Bray, who says Reigns’ sins will be his undoing. It is the sin of pride that will bring Reigns down because he isn’t Bray’s muse. On Monday, Bray is going to deliver a prophecy to Reigns. Anyone but you.

Rematch from Raw. Ascension and Stardust are sitting in the crowd with a STARDUST SECTION sign. Barrett and Neville get things going with Neville starting his kicking regimen early. Sheamus comes in and eventually gets hurricanranaed out to the floor, allowing Cesaro to backdrop his partner over the top and onto the villains.

Back from a break with Barrett putting his knee into Neville’s back and cranking on the arms. Sheamus stands between Neville and the corner before planting him with a slam. We hit the chinlock from Barrett for a bit before he misses a running boot in the corner. Cesaro gets the tag and fires off the running uppercuts to Sheamus for two. The briefcase is brought in and the distraction lets Barrett get in a Bull Hammer to give Sheamus the pin at 10:10. Stardust and Ascension never got involved.

Summer, guest referee for Ziggler vs. Rusev later tonight, says she’s put men down before and is willing to do it again if she has to.

Earlier today, Ambrose unloaded his bag, which included a Slammy, a slinky, a balloon animal, a magic 8-ball…..but no Payday. Oh never mind as it fell out of his bowling ball.

Non-title and Ryback is at ringside. Owens shrugs off an early flurry and stomps Ryder down. A quick missile dropkick doesn’t have much staying power for Ryder as Owens hits a Meathook, shouts FINISH IT and plants Ryder with the Pop Up Powerbomb for the pin at 1:39.

Recap of Rollins and Kane on Monday.

Paige stops Natalya in the back to offer an apology for her attitude as of late. The pressure got to her and she couldn’t handle Natalya trying to take her place on Team PCB. Paige wants to make it right and just wants to be Natalya’s friend again. Natalya says this is a start and leaves.

Summer Rae is guest referee and Dolph doesn’t seem to mind when she takes her hair down. Rusev stomps Ziggler in the corner to start as Booker confuses Sherri Martel for his wife Sharmell. Ziggler gets knocked off the apron and into the barricade for a nice crash. Back in and Rusev charges into an elbow, followed by an elbow for a fast two. We get a Danny Davis reference, followed by Dolph’s superkick being countered into a catapult into the corner. Rusev’s jumping superkick gets the slow count followed by a slap to knock Rusev into the Zig Zag for the pin at 4:26.

Post match Summer suggests she and Dolph get back together but Dolph isn’t playing those kind of games.

The Dudleyz say they have chemistry with Dean Ambrose. They’re already the best team ever and Dean is combustible. Bubba tells Renee to touch Dean’s arm. Bubba: “BOOM!” Dean says Dudleyville reminds him of Cincinnati and they’re going to take the New Day to the lunatic fringe. BOOM!

Small change here as the Wyatts are in the upper left corner and the Players are in the lower right. You rarely see those changed up. Titus tries his luck against Braun to start and some corner clotheslines stagger the giant. They only stagger him though as Braun throws him into the corner and brings in Harper for a Gator Roll. O’Neil powers over for the tag to Darren as things speed up. Darren goes after the now legal Strowman but Harper superkicks him into the standing choke for the win at 2:59.

Non-title. Fox takes over with a quick backbreaker and we hit the chinlock. We see Team BAD watching in the back as Alicia’s northern lights suplex gets two. Both of them try big boots at the same time but it’s Charlotte up first with the spear and the Figure Eight for the submission at 3:10.

Team Bella attacks post match but Paige makes the save.

Post break Paige thinks PCB is back together but the other two aren’t convinced. They head into their locker room and find Natalya laid out.

Video on Lesnar vs. Undertaker.

Kofi tells everyone to forget what they learned in science class because the strongest force in the universe is the power of positivity. Cena, Ziggler, Orton, D-Von, “Bully Ray Dudley” and Ambrose have all come to the New Day and gotten dropped. It’s all science you see. You could even call it geology because New Day ROCKS. Dean is in a Cincinnati shirt and earns the hometown pop. We take a break before the bell and start with Kofi headlocking Bubba.

D-Von comes in for a double elbow but Kofi drives him into the bad corner. A low blow gets D-Von down into the corner for the rotating stomps. Woods gets in a running forearm in the corner but D-Von grabs a neckbreaker. Lawler lightens the mood by talking about how the New Day won’t go near a boot because it has a table of contents.

Dean comes in to clean house and Woods eats the suicide dive. The top rope standing clothesline gets two on Woods but Big E. hits a clothesline of his own. Bubba gets the tag for the Bionic Elbow to Kofi as everything breaks down. Dean goes up top for a dive on Big E. but Woods shoves him to the floor. Kofi eats 3D but Woods gets in a trombone shot for the DQ at 9:35.

New Day lays out the Dudleyz to end the show. 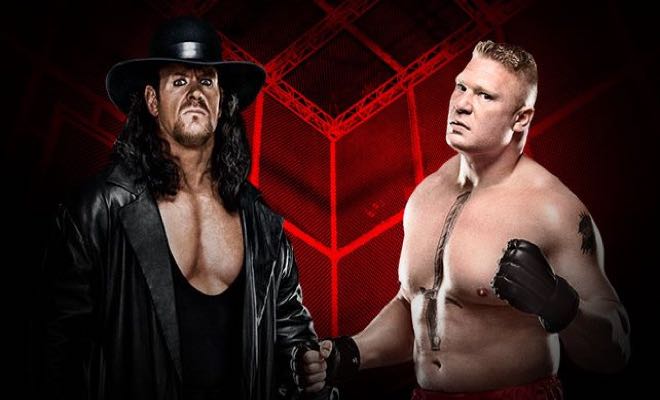 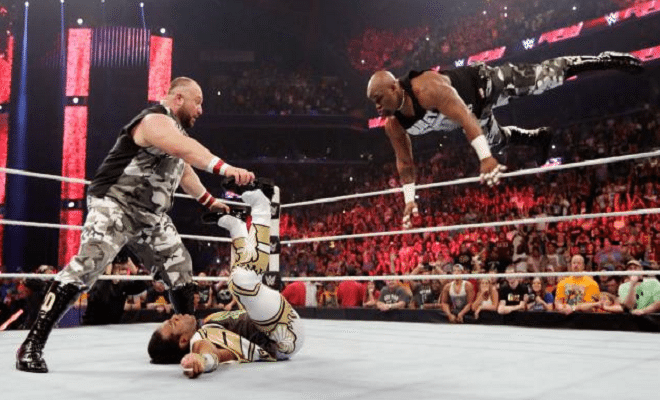 Dudley Boyz Appear on First Podcast Together on Talk is Jericho