As we switch from red to blue this week, the big story has Randy Orton being thrown out of the Authority and laid out with a pair of Curb Stomps. Other than that we have Cena and the Authority trying to firm up their teams for Survivor Series. So far both teams have only a few people but we have a few weeks to get ready. Let’s get to it.

The Dusts are defending and this is inside a cage with pins, submissions or escape to win. Stardust tries to escape early but Jey makes a save. All four come in and we have an early standoff. We settle down to Goldust getting double teamed in the corner until Jimmy gets two off a standing flip splash. Jimmy sends him into the cage for the same result but his cross body only hits steel.

We take a break and come back with Goldust rubbing Jimmy’s face against the cage. A chinlock doesn’t get Goldust anywhere as Jimmy fights up and climbs the cage, only to be taken down with an electric chair. The second chinlock has Jimmy in more trouble but he fights up and climbs again. Goldust makes another stop but gets nailed by Whisper in the Wind.

Jey comes in off a hot tag to clean house and sends Stardust into the cage, setting up a superkick for two. Everything breaks down and Cross Rhodes gets two on Jey. Stardust goes up but Jey makes a save. All four guys get on turnbuckles, allowing Jimmy to superplex Goldust, setting up a Superfly Splash from Jey. Goldust is done but the legal Stardust grabs a rollup out of nowhere to retain at 12:15.

We recap the Authority’s issues from Monday, culminating in Orton being knocked out so badly that he thinks he’s an actor.

Kane is in the ring to talk about handling Orton before Survivor Series. Randy should serve as an example of what’s coming to anyone else stands up to the Authority. Dolph Ziggler thinks he can survive Team Cena, but tonight he has to survive against Kane inside that steel cage. Back to Survivor Series, Team Authority has an open spot.

This is joined in progress after a break with Cesaro driving him into the corner and putting on a chinlock. A low dropkick to the face gets two on Ryback and a suplex gets the same. Back to the chinlock but Ryback fights up and flips Cesaro down. A big spinebuster puts Cesaro down and there’s the Meat Hook, only to have Cesaro escape Shell Shock.

Ryback is sent shoulder first into the post and a top rope elbow gives Cesaro two more. Cesaro loads up a suplex but Ryback counters into one of his own, only to have Cesaro drive upside down knees to Ryback’s head. Ryback grabs Cesaro’s leg as it comes down though and Shell Shocks him for the pin at 3:53.

Kane applauds Ryback but Ryback walks away without acknowledging him.

This is a result of Truth saying the Bunny was the real star of the team. Truth nails a shoulder to start and does a quick Bunny hop. Rose puts his hand up and jumps into Truth’s arms, only to be thrown down. The Bunny jumps up on the apron, allowing Truth to roll up Rose for the pin at 1:24.

Rose lays out the Bunny post match and dances with the Rosebuds. The Bunny looks stunned. Well, as stunned as a Bunny can look.

Here’s the returning Christian for one more…..episode of the Peep Show. He asks the fans who they think is winning at Survivor Series and of course the people are behind Team Cena. Guest Dean Ambrose cuts him off though as he doesn’t like being patience. Christian asks what it’s like to be Dean now, because the last thing Christian remembers is Dean ticking off the entire roster as a member of the Shield.

Dean says he has no friends and is always looking over his shoulder but he wouldn’t have it any other way. As for Bray Wyatt, Dean doesn’t really know why he’s coming after him. Dean doesn’t have a title that Bray wants or anything like that, so maybe Bray is just preying on people like he always does. Bray likes to manipulate people’s minds, but Dean is just crazy enough that it doesn’t work. It’s a thrill to live the way he does, riding the edge of a lightning bolt. He loves living this way…and here’s Wyatt to cut him off.

Bray says Dean has nothing to fear because he has nothing to lose. There was a time when Dean had the security of the Shield around him but that was taken away, leaving Dean like a fish on land, gasping for air. Bray however, is a healer. He healed Harper and Rowan and now he can heal Ambrose. Wyatt can take Dean’s hand and heal all his pain, but not everyone can be saved.

Daniel Bryan once defied him and now Bryan is nowhere to be seen. What does Dean have to lose? His own father turned his back on him. Does he still send Ambrose postcards from prison? Bray invites Dean to prove him wrong, so Dean goes up the ramp as the lights cut off again. Ambrose gets to the stage and there’s no one in sight.

We look at Rusev beating Sheamus on Monday’s post show. Since it’s an “exclusive”, we only see the last three minutes or so. After the match, Lana said they were taking the title back to Russia for Putin.

AJ says Brie slapped her on Monday but it was the evil twin that made her do so. Brie comes in to apologize, but it’s a ruse so Nikki can get in a cheap shot.

This is due to Summer spending too much time around Tyson Kidd earlier today. Considering how much Tyson and Natalya hate each other on Total Divas, it’s odd that Natalya would be annoyed at all. Kidd is on commentary and takes credit for weakening Sheamus for Rusev. Summer takes Natalya down with a bodyscissors until Nattie comes back with a slam. Cole suggests Kidd support his wife, so he gets up and tells her to put on the Sharpshooter. The distraction lets Summer grab a rollup for the pin at 1:34.

Cena vs. Ryback on Raw in England.

Dolph says he’ll do whatever it takes to get rid of the Authority. Cue HHH, who is surprised Ziggler is here after the beating Rollins gave him on Monday. Orton isn’t here tonight though, so who is going to save him tonight? Maybe he should save himself by joining the Authority.

Cole brings out the founder of an organization called Soldier Socks and a wounded soldier named Dan Rose. The founder talks about the organization as Rose is put into a different wheelchair. We get a news clip about some new technology that allows wounded soldiers to walk again. Back in the arena, Rose talks about losing the use of his legs due to a roadside bomb in Afghanistan. Using the new equipment, Rose is able to stand up and walk across the stage using two walking sticks. Rose gets a well deserved standing ovation. That’s a very cool moment to see and one of those things that is almost hard to believe.

Inside a cage and non-title. Before the match, we get the eyes vignette from Raw. Ziggler looks at the screen and isn’t sure what to make of it. Kane slugs away to start but gets caught in a faceplant for two. Dolph tries to climb out a few times but gets sent into the cage for his efforts.

We take a break and come back with Dolph getting kicked in the face for two.

Kane takes off a turnbuckle pad but misses a charge into another corner, setting up Ziggler’s running DDT. Both guys climb to the top rope and both quickly get crotched for their efforts. Ziggler dives into an uppercut but escapes the chokeslam. He tries to escape and gets slammed down, setting up the chokeslam to knock him silly. Kane calls for a tombstone but takes WAY too long, allowing Ziggler to hit the Zig Zag for two.

Dolph takes too long going for the door, setting up a collision to put both guys down again. Back up and Kane misses a charge into the exposed buckle. Dolph climbs his back and over the cage but Kane kicks the door open to break Ziggler’s balance and leave him hanging on the door. Kane goes to escape but Dolph kicks the door onto his head and drops down to win at 11:36.

Stardust/Goldust b. Usos – Rollup to Jey 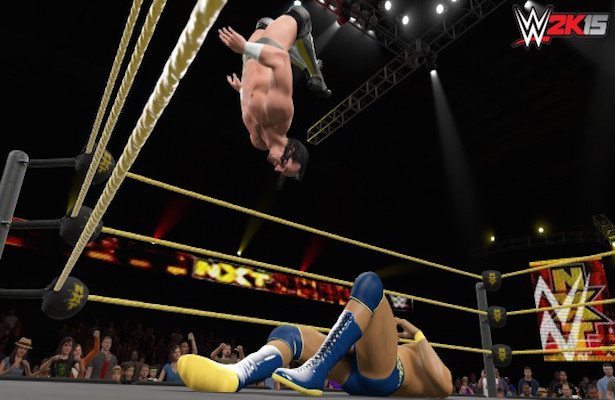 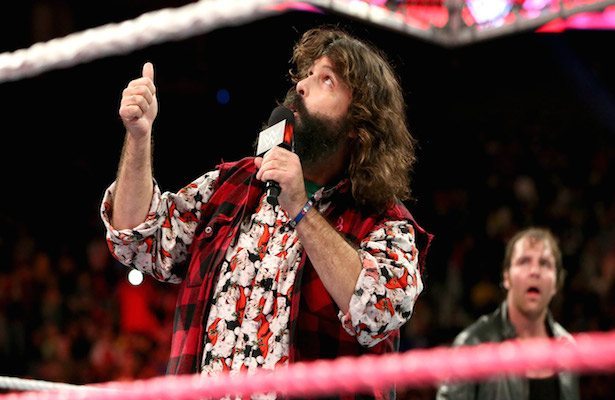