We’re still over in England for the final TV show of the tour. Things are finally starting to shape up for Survivor Series and not a moment too soon. We’re nine days from the PPV and there are only three matches announced so far. Raw hinted at a traditional Survivor Series match between Shield and perhaps Bray Wyatt vs. Cody Rhodes/Goldust/Usos which could be entertaining if not a bit lopsided. Let’s get to it.

We open with a recap of the end of Raw with the big twelve man brawl between all the tag teams.

As the Family is on on the way to the ring, Cole announces the Family vs. Punk/Bryan for Survivor Series which should be a good rub for the monsters. Jey charges at Rowan to stat but takes a knee to the ribs. Off to Harper who charges into a boot in the corner and it’s off to Jimmy for a running forearm in the corner. Jey makes a blind tag and Jimmy superkicks Harper to stagger him back. Harper shrugs it off and punches Jimmy in the mouth to take over.

Rowan comes in for a neck crank as JBL and Cole talk about Rowan wearing the mask so “he can be anybody he wants to be.” Jimmy escapes a belly to back suplex and tags out, only to walk into something resembling a high collar suplex for two. Jey avoids a seated senton and hits a low dropkick, only to be launched upside down into the corner.  We take a break and come back with Harper Gator Rolling Jey into a chinlock.

Back to Rowan for a backbreaker as the announcers debate if the Wyatts are related. Rowan tries a clothesline but walks into a quick enziguri to put both guys down. The hot tag brings in Jimmy who scores with some clotheslines to Harper and a running forearm in the corner. A top rope clothesline sets up a Samoan drop and Harper is in trouble. He explodes out of the corner to clothesline Jey down but Jimmy makes the save. A double superkick gets two on Harper and Jimmy dives over the top to take out Rowan. Jey loads up a dive of his own but walks into the discus lariat from Harper for the pin at 7:53 shown of 11:23.

Post match the Wyatts circle the Usos for the beatdown and the monsters are just too much. Bray comes in as well and destroys Jimmy, shouting that no one judges him. He says at Survivor Series, they’ll show the world how to leave a scar and teach their victims to never forget tragedy.

We go back to Raw where Heyman ranted about how stupid Ryback was and blamed him for the beating at HIAC.

Axel and Ryback are in the back with the monster saying he has no intention of being in a team with a Paul Heyman guy. If Axel is still sucking up to Heyman, not only is he teaming up with Axel but he also has a big problem with him. Axel says he isn’t a Heyman guy anymore but tonight he needs Ryback.

R-Truth practices his rapping when the Prime Time Players come in to rap with him and practice the Millions of Dollars dance. Ok then.

Tamina cost Natalya her Divas Title match on Main Event to set this up. Natalya charges her into the corner to start but walks into a boot in the corner. A powerslam puts Tamina down but AJ gets on the apron for a distraction. Tamina runs into her boss though and the Sharpshooter gets the submission for Natalya at 1:20.

We look at Orton being chokeslammed through the table on Raw.

The GM’s are in the back with Brad playing Exposition Man to recap the events from Monday. Vickie tries to explain the power structure which is made even more confusing when their authority is all secondary to the Authority.

The Jacks are 3MB and described by JBL as Austin Powers crossed with the Mean Street Posse. Titus and Mahal get things going as Cole calls Jinder a “Jack-ette”. Titus throws Mahal around but Drew makes a blind tag and kicks O’Neal down. Back to Mahal with a jumping knee to the face for two before it’s off to Slater for some forearms to the back. We hit the chinlock until Titus fights up and runs Slater over, allowing for the hot tag to Truth. Cole: “Truth getting jiggy with it!” Everything breaks down and Little Jimmy gets the pin on Slater at 3:43.

Time for some arm wrestling! Alberto has challenged Cena to one of the all time stupid contests which has gone the same way every time in wrestling history. Cena agrees to the challenge and says let’s do it while turning his hat around backwards. A guy in a Superman outfit approves so we’re ready to go. Cena, with the good right arm, wins in about half a second. Del Rio wants a rematch and loses just as fast. Alberto punches Cena while the hands are still locked and puts Cena through the table. What a waste of time this was.

Cameron elbows Nikki down to start but gets caught in an Alabama Slam (surprising pop for that) for two. Cameron gets up two feet in the corner and gets two off a middle rope cross body. Off to Naomi who pounds on Nikki until she tags out to Brie. Not that it matters much as the Rear View is enough pin pin Brie at 2:34. I’m almost positive that Chimmel called the winners the “Funky Jiggles.” I went back and listened to it twice and it was definitely two words. Might have been a rib of some kind.

Daniel Bryan and CM Punk are with Renee Young in the back and answer every question with YES. Bryan refers to the team as the Beard and the Best which Punk says Bray will hate. Punk says they’re going through the Family at Survivor Series then cutting off the snake’s head.

Hunico still has a job??? Camacho gets clotheslined down to start and there’s the loud chop in the corner. Hunico comes in as well and gets destroyed with ease before the Punjabi Plunge ends Hunico at 1:15. Complete squash.

The Raw ReBound recaps the opening segment with Orton going through the table.

Axel and Punk get us going and Cole sums up Axel’s title reign in a single statement: “Axel’s victory over Dolph Ziggler on Raw was a career changer.” The Intercontinental Champion’s career was defined by beating a jobber to the stars clean in a meaningless, non-title match on Raw. Let that sink in for a minute and it sums up the state of the midcard and a lot of WWE as a whole.

Axel grabs a headlock to get things going but gets sent into the ropes for a hard knee to the ribs. Off to Bryan who cranks on the arm but Ryback gets the tag and takes Bryan into the corner. Bryan catches him with a drop toehold into the middle buckle and the good guys double dropkick Ryback down for less than a one count. A slam puts Punk back down though and it’s off to Curtis for a two count.

We hit the chinlock until Punk suplexes his way out and hits the running knee in the corner. Ryback pulls Axel to the floor before Punk can launch a Macho Elbow. Instead the good guys hit stereo suicide dives/FLYING GOATS to take them both down.  We take a break and come back with Axel charging into Punk’s boot in the corner. Ryback comes in again with a delayed vertical suplex and a legdrop for two. Back to Axel who gets caught in a small package for two but cranks on an armbar before the hot tag can go through.

Punk is dragged back to the heel corner and pounded down but he comes out with the swinging neckbreaker, allowing for the hot tag off to Bryan. Things speed up with Ryback being taken down by the running clothesline. Bryan goes after Ryback’s leg and fires off the kicks to the chest. The big kick to the head gets two as Axel saves, only to be taken down to the floor by Punk. There’s the YES Lock on Ryback and we lose the lights. We’ll say that ends the match at 13:10.

The lights come back on but Bryan and Punk are nowhere to be seen. The Wyatts look around but it’s just an out cold Ryback and Axel left in the ring with the monsters. Ryback gets up and shoves Axel into Harper, earning the Intercontinental Champion a beatdown. Even when he doesn’t job he gets beaten down. Ryback gets back up and tries to save his partner but two power guys are better than one, leading to another beatdown. With Bray stomping on the former Heyman guys, Punk and Bryan sneak out from under the ring and gets in some cheap shots before running to the stage to end the show.

CM Punk/Daniel Bryan vs. Ryback/Curtis Axel went to a no contest when the Wyatt Family interfered 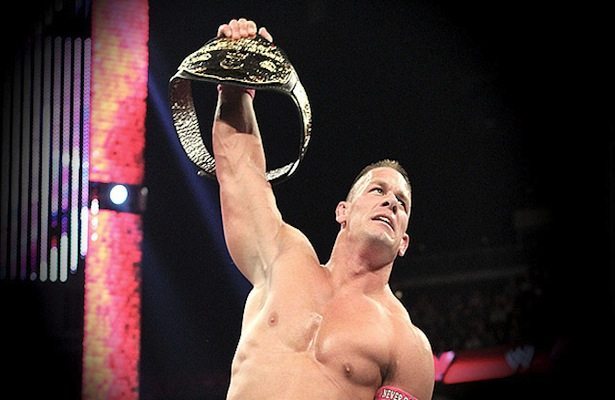