It’s the final show before Extreme Rules and this past Monday wasn’t exactly the strongest episode of Raw in recent memory. The stories are starting to run out of steam and Sunday can’t get here soon enough. Odds are tonight is going to be about the Intercontinental and WWE World Title stories, which could go a few different ways each. Let’s get to it.

The opening recap focuses on Monday’s oddball tag match and makes sure to show Shane and Stephanie setting it up.

Miz, Maryse and Sami Zayn are on commentary. Miz gets right to the point and says tonight’s MizTV is canceled. They slug it out to start as Miz and Sami bicker about Miz constantly getting beaten up. Cesaro dropkicks him out to the floor, followed by some chops. Back inside and Cesaro hammers away as we look at the announcers. Owens bails from the threat of a European uppercut so Cesaro follows him out for the running version up against the barricade. Maryse offers a distraction and Owens knocks Cesaro into the table and then whips him into the steps for a bonus.

Owens mocks Miz’s flapping arms and drops a backsplash for two (Owens: “HOW IS MY CLOSEUP?”). Maryse yells at Sami in French, forgetting that he’s from Montreal. Another backsplash hits raised kneesbut Owens sends him into the corner for the Cannonball.

Back from a break with another shot of the commentary team showing Miz and Maryse kissing. Cesaro fires in an uppercut to break up the frog splash and grabbing a gutwrench superplex to put both guys down. A high cross body gets two for Cesaro as the wrestlers on commentary actually start paying attention and breaking down the match. The Swing doesn’t work though and Owens bails to the floor, only to have him blast Sami in the face.

Cesaro flips off the apron to take out Owens before punching Miz in the face. Back in and Cesaro’s eats a superkick for two but Sami comes in, only to have Cesaro punch him in the face, either over the Helluva Kick last week or to prevent a DQ. The distraction lets Owens get in a rollup with a handful of trunks for the pin at 14:48.

Becky Lynch is on commentary and says her eye injury is the worst thing she’s ever had because the double vision means she has to see Dana twice. Paige knees her in the face to start as we hear about Becky fighting Paige’s mom over in the UK. Dana trips Paige up though and we hit a leg scissors back inside. Becky thinks she should be named Becky Balboa because she keeps getting up like Rocky. Some kicks and knees stagger Dana but she grabs a Samoan Driver for the upset pin at 3:16.

Lana, with that accent dying faster than Paige’s push, says Kalisto is hiding behind his mask and that Rusev is the greatest champion of all time. Rusev says the chant will be MACHKA MACHKA MACHKA.

Ziggler is shoved around to start before coming back with knees and right hands in the corner. A hard ax handle to the face drops Ziggler though and we take a break. Back with another ax handle blasting Dolph in the face before his superkick is countered with an elbow to the knee.

We hit the chinlock for a bit before Ziggler fights up and gets in a Fameasser for a near fall. The neckbreaker is broken up though and Sheamus gets two off the Irish Curse. Back up and the Zig Zag is countered but Sheamus misses a charge, setting up a superkick to give Dolph the fluke pin at 10:48.

Corbin comes out to say he’ll hurt Ziggler on Sunday.

The Asylum cage is lowered and here’s Chris Jericho for a chat. Jericho demands quiet by saying QUIET over and over before pointing out the cage hanging above us. Jericho lists off all of the matches that he’s been in over the years and admits that he’s never been in an Asylum match because there’s never been one. However that means Ambrose hasn’t been in one either, meaning Jericho has the advantage because he’s smarter and crazier.

Jericho asks that the cage be lowered as he talks about how he put Dean in the hospital with a twenty pound plant. Looking up, Jericho adds up the days he can put Dean in the hospital by using all of these weapons, which he sees as at least forty days. That’s not counting all the mental anguish that goes with it, but above all else, Dean is receiving the Gift of Jericho. As the crowd drinks it in, a production worker comes in and of course it’s Dean, who beats Jericho down with a kendo stick to send him running off.

And now, a life lesson with Bob Backlund. Bob talks about how Darren should be able to memorize these things and demands that he recite the Presidents of the United States in order. Young: “Coach no one can do that.” Backlund: “Washington, Adams, Jefferson….” Young swears a bit and Backlund LOSES IT, saying that no one needs that kind of language and demands 200 jumping jacks because Young needs to be great in the ring.

During the entrances, we see the Vaudevillains destroying the time machine, which messes up the announcers’ audio for some reason. D-Von and Big E. get things going with the latter getting two off a belly to belly. Byron’s audio is still barely audible as D-Von runs Kofi over and brings in Bubba, who misses a splash attempt. It’s time for the Unicorn Stampede before a big staredown takes us to a break.

Back with Woods hammering on Bubba in the corner until Ray clotheslines him down. Byron’s audio is back because we’re just that lucky. The Vaudevillains starts taking over now with Gotch snapmaring Woods so English can drop a knee for two. The Dudleyz don’t seem thrilled with their lack of ring time here as Bubba shouts at Gotch for tagging in English instead of D-Von.

Bubba comes in instead and punches away while shouting about Bootyo’s. Woods finally gets away and makes the hot tag off to Cass for the house cleaning. Everything breaks down and Big E. suplexes Gotch before throwing Kofi over the top onto English. A botched looking East River Crossing sets up the Empire Elbow to give Cass the pin at 10:38.

Long video on Natalya vs. Charlotte on Sunday with Charlotte talking about how she’ll be twice as good as her dad because she uses the Figure Eight instead of the Figure Four.

Non-title. Usos vs. Anderson/Gallows in a Texas Tornado match is official for Sunday. Anderson/Styles/Usos, the latter again without the Siva Tau, are at ringside here. They trade elbows to start but only Reigns goes down. A second elbow knocks him outside so Reigns comes back inside where his Samoan drop gets two. We take a break and come back with Reigns firing off kicks to the ribs until Gallows takes his head off with a clothesline for a near fall of his own.

We hit the chinlock for a bit before a corner splash crushes Reigns again. That’s enough action so we hit the chinlock again. Roman gets up for a jumping clothesline but AJ’s distraction lets Gallows get in a rollup for two. There’s the Superman punch but AJ grabs Reigns’ foot to break up the spear. Everything breaks down on the floor with Reigns kicking AJ in the face, only to walk into the Gallows’ Pole (chokebomb) for a very close two. Anderson comes in and that’s a DQ at 11:50, despite him not touching anything.

Post match Anderson gives Reigns the Boot of Doom and the fight keeps going. AJ is the only man standing but he takes too long loading up the announcers’ table. Reigns gets in a few shots but everyone else gets back in it to end the show. 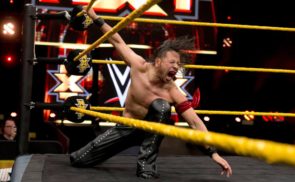 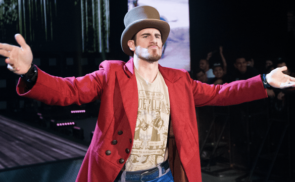