Smackdown has the potential to be interesting this week as we could get some more midcard build for Summerslam, which could be some of the more interesting stuff going on in WWE at the moment. The big story is likely to be Cesaro vs. Kevin Owens, which could be the match of the night at the pay per view.  Let’s get to it.

Here’s Seth Rollins to open things up. Seth: “SO WHAT?” Those are the words he’s heard so many times over the year. He heard them when he was the first person to cash in Money in the Bank at Wrestlemania and the man who stood toe to toe with Brock Lesnar at Battleground and came out with the title. This past Monday he reached his breaking point and the victim of his rage was John Cena, who went to the emergency room with a broken nose.

Non-title. Cesaro goes after the leg with some dragon screw leg whips to start but the threat of a Sharpshooter sends the champ bailing to the floor. Cue Kevin Owens to watch as we take a break. Back with Rollins holding a headlock and Owens’ head holding a headset for commentary. Cesaro double stomps Seth for two and catches a diving Rollins in midair. That’s not enough of a power display for Cesaro though so he throws Rollins up for a suplex.

Rollins is able to send him into the buckle with the release Downward Spiral and now it’s Seth with the European uppercuts for a change of pace. A chinlock doesn’t get Rollins very far as Cesaro powers out with a belly to back suplex. Cesaro loads up the Swing but Owens comes in for the DQ at 8:35.

Owens lays out Cesaro and Rollins gets in a few shots of his own.

Before the match, New Day says the Lucha Dragons and Los Matadores could be #1 contenders, so if New Day wins tonight, they should be the #1 contenders! After some over the top introductions, it’s Woods on the floor as Diego leg sweeps Viktor to start. A slingshot elbow from Diego sets up a slingshot hilo from Sin Cara, who starts working on the arm.

It’s off to Konnor for some hard kicks to the ribs before New Day breaks up a dive and sends Cara out to the floor. Well that sucks. Back from a break with Woods calling Cara stupid as the villains take turns stomping away in the corner. Viktor’s chinlock doesn’t work very well as the Players say they’d love to face the Usos. Big E. holds Cara for a running knee to the face from Kofi as Woods is still going on.

Darren passes the time by wearing glasses and taking notes. Viktor runs Cara over for two more as hear about Big E. making Young sick for some reason that Young doesn’t want to get into. A Crossface keeps Cara in trouble but he finally avoids a charge, allowing for the Kalisto. Everything breaks down and Kalisto kicks Big E. down, leaving Torito to hit a kind of 619 to knock Woods silly. Big E. loads up the Midnight Hour but Viktor takes Kofi’s tag, only to get rolled up by Kalisto for the pin at 10:10.

Owens is told that the Authority has made Owens/Rollins vs. Cesaro/whomever he can find. Kevin isn’t pleased and is going to take it out on Cesaro’s partner.

Video on Becky Lynch, complete with some old school pictures of her in Japan with Natalya.

Luke Harper says Bray Wyatt saved him by showing him the truth so now Harper has everything he needs. Wyatt talks about Harper liking where he is now and deciding to stay. Anyone but you Roman.

Rusev comes out for his match but first up he and Summer have something to say about the fish incident from Raw. Lana ruined the hot Summer because she’s jealous and now Rusev would never fall for her again. After winning tonight, Rusev is going to take Summer and Dog Ziggler for a walk anywhere but Oklahoma. Maybe they’ll lay on a blanket, stare into each other’s eyes and….now it’s time for the match.

Swagger starts with some armdrags to send Rusev outside as Tom makes the mistake of talking about their rivalry last year. Back in and Swagger wrestles him to the mat but Rusev just throws him into the corner and drives a knee into the face. Rusev starts in on the back to set up the Accolade later. The slow stomping continues as the fans try to believe. Swagger comes back with some clotheslines and punches in the corner, only to have Rusev blast him in the face as we go to a break, because this feud just has to keep going. Back with Rusev holding a front facelock.

Swagger fights up and kicks Rusev’s ducked face but the Vader Bomb misses. Instead Jack plants him with a belly to belly and is promptly nailed with a spinwheel kick. The back and forth continues as Swagger goes after the leg to set up the Vader Bomb. The superkick sets up the Accolade to make Swagger tap at 14:40.

Post match Swagger pulls himself up and avoids a charge, followed by the Patriot Lock to Rusev.

Cesaro isn’t going to hunt for a partner because no one here owes him anything. He’s gotten here on his own and if he has to, he’ll fight on his own.

We recap Neville vs. Stardust.

They run the ropes to start and we get a bit of an awkward pause as Truth has to hit a running fist to take over. Stardust gets in some shots, R-Truth gets in his kicks, Stardust sends him into the buckle and the Queen’s Crossbow (Cross Rhodes) is good for the pin at 2:01.

Stardust says Neville has failed this city (a line from Arrow) so here’s Neville to save Truth from further beating. Again, nothing great, but I’m kind of liking this.

Sheamus says he kicked Orton in the face on Monday for Orton showing him up at Battleground. He did it because he’s a real man, unlike Orton who just thinks he’s a real man. The idea of WWE without Orton is like Oklahoma without Tulsa: a dream come true.

Video on Undertaker vs. Lesnar. Brock is back on Monday.

Cesaro is here alone until Dean Ambrose comes down as a surprise. It’s a big brawl before the bell with the good guys cleaning house twice in a row as we wait for the opening bell. We take a break and come back with the bell, meaning it’s Dean vs. Seth before Cesaro quickly comes in to keep the champ on the mat. Owens gets punched off the apron but the distraction lets Rollins gets in a shot to take over.

The bad guys take over with Owens firing off knees in the corner and it’s back to Rollins for a chinlock. Back to Owens for some right hands for two and a chinlock of his own. Rollins comes back in and misses the top rope knee to the head, allowing the hot tag to Dean. He backdrops Seth to the floor for a suicide dive. Dean’s superplex doesn’t work as well as Rollins counters into a buckle bomb for two.

The top rope knee to the head and low superkick get two more but Owens takes too much time going up and gets crotched for his efforts. The attempt at a superplex goes badly for Ambrose though as Owens counters into the swinging superplex for another near fall as Cesaro dives in with a double stomp for the save. The backsplash misses too and it’s the real hot tag to Cesaro.

That kind of reverse Angle Slam sets up the Crossface on Owens but Rollins’ attempt at a save earns him a Swing. Cesaro clotheslines Owens outside, leaving Dean to stop Rollins from diving on the two of them. Instead Dean superplexes Rollins down, only to have Owens try the Pop Up Powerbomb. Dean is ready though and slips out, setting up a rollup from Cesaro for the pin on Kevin at 14:03. 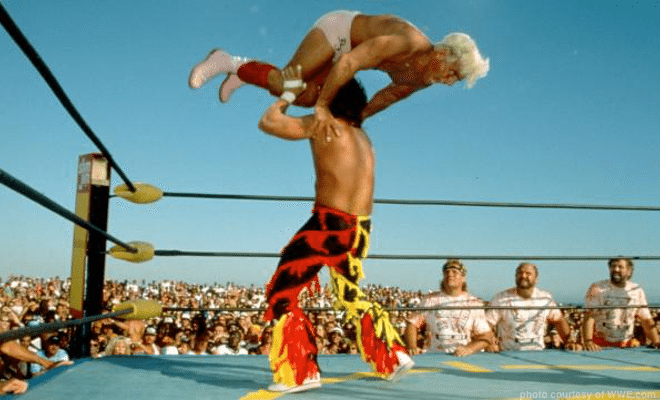 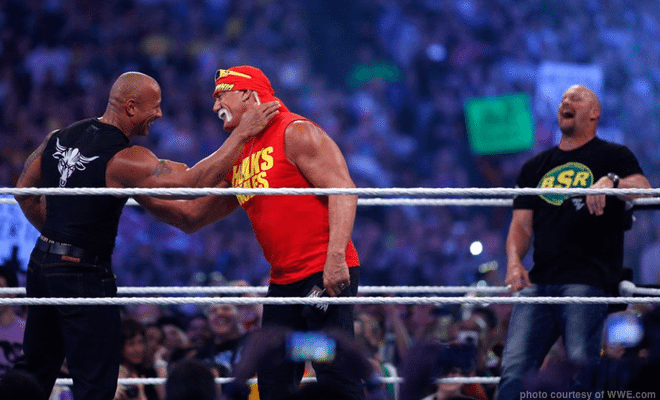 The Rock Comments on the Current Hulk Hogan Controversy