This is a big night as Smackdown is now on the USA Network after sixteen and a half years bouncing around various other networks. Therefore tonight is going to be a major show with two title matches and an appearance from the now injured John Cena. We’re now in full build towards the Royal Rumble where Roman Reigns will be defending the WWE World Title against 29 other men. Let’s get to it.

We open with a recap Reigns defending the title against Sheamus and then Vince announcing his Rumble title defense.

New commentator Mauro Ranallo is welcomed to the team.

Here’s John Cena for a chat. He hypes up the two title matches tonight and says the only thing missing is the USA Champion. It’s a new year and a new network so let’s try a fresh start tonight. Cena does a long Ricardo Rodriguez introduction for Alberto and here’s the champ. However, Alberto is too smart to fall for what Cena is trying. There’s no way that Juan is getting his title shot tonight.

That’s not what Cena is going for though. The fans are fired up to see Alberto Del Rio tonight and they’re clearly wanting to see a US Title match tonight right? Fans: “SI! SI! SI!” Alberto will fight anyone not named John Cena, though the title doesn’t seem to be on the line. Cena has the perfect choice.

Non-title. Kalisto quickly sends him out to the floor and Cena is right there doing the Lucha Dragons dance. Back in and Kalisto handsprings into a kick to the head. The threat of the Salida Del Sol sends Alberto outside though and we take an early break. We come back with Del Rio getting two off a belly to back suplex. Del Rio gets in a kick to the head of his own as the fans chant something in Spanish.

Kalisto is put in the Tree of Woe for some kicks to the ribs. It’s not for that top rope double stomps just yet though as Alberto misses a charge into the post, allowing Kalisto to speed things up again. The hurricanrana driver is countered into a sitout powerbomb for two and the frustration is starting to set in. A DDT puts Kalisto on the floor and Alberto taunts Cena. Back in and Del Rio loads up the cross armbreaker, only to have Kalisto grab a quick hurricanrana for the pin at 9:15.

Becky Lynch says she and Charlotte are no longer friends. Tonight she’s going to take the title and not be friendly about it at all.

It’s time for MizTV with Miz talking about the Royal Rumble for a few seconds before New Day cuts him off. After Big E. makes it clear that they are NOT a bunch of rootie tooties, Woods says Jericho stole the light up jacket from him in the old NXT days. Cue Dolph Ziggler for no apparent reason but Goldust cuts him off before we can get to the witty insults. Goldust is willing to give Miz and company some golden globes so here’s Neville to interrupt as well.

Neville offers to teach Miz his accent and whatever else he wants as long as Miz cancels this horrible show. Miz is offended but R-Truth cuts him off this time. Truth tries to answer Del Rio’s US Open Challenge so Miz has to tell him there’s no such thing. Truth: “…..all right. What were you all here talking about?” Instead, Truth tries to enter the Royal Rumble but isn’t sure he can afford the entry fee. Miz offers him a dollar to buy a clue so Truth hits him with the mic, meaning it’s time for an eight man tag.

This is joined in progress with Truth hip thrusting at Miz and bringing in Goldust. Make that Ziggler with a dropkick to Kofi before it’s time to start in on the arm. Neville does some hip gyrating and drops a standing shooting star for two. Some right hands in the corner have Kofi in even more trouble until Woods finally pulls Neville off the ropes to give his team a breather.

Back from a break with Neville caught in the Unicorn Stampede. Woods gives us some music and New Day is astounded by Miz’s dancing. We hit the chinlock from Woods for a bit before Neville backdrops him over the corner, leaving Woods on the floor with some very glossy eyes. The hot tag brings in Ziggler to clean house with Ranallo bringing up the Social Outcasts from Monday. Everything breaks down and Miz winds up surrounded, setting up a Ziggler superkick for the pin at 11:16.

Post match Ziggler beats up his teammates and throws Goldust to the floor because it’s every man for himself.

The Flairs say Charlotte is ready.

Becky is challenging. After some big match intros, Charlotte takes her down to start as Lawler is trying to call Ranallo M.R. An early armbar attempt doesn’t work for Becky so she tries some rollups for two each. Charlotte has to spin out of a hammerlock but a springboard kick to the chest puts the champ on the floor. Becky goes after her but Ric gets in the way, allowing Charlotte to kick her in the face to take over. Charlotte throws her with some suplexes but stops to pose as we take a break.

Back with Becky caught in a figure four choke before Charlotte flips her over a few times. Lynch actually gets underneath her to drop Charlotte face first into the buckle for the break and it’s time for the clotheslines. Charlotte comes back with a neckbreaker out of the corner for some near falls but Becky small packages her to break up the Figure Eight. There’s the Disarm-Her but Flair puts Charlotte’s foot on the ropes right before Charlotte taps. Becky is furious, allowing Charlotte to grab a rollup with her feet on the ropes for the pin at 14:12.

Recap of Monday’s main event and Vince making Reigns defend the title in the Royal Rumble.

After Raw went off the air Monday, Reigns said he’s ready to fight all at the Rumble.

Ambrose says Owens is the prize fighter but the prize is on Dean’s shoulder. Let’s fight.

Owens is challenging. They shove each other around to start and the threat of Dirty Deeds sends Owens out to the floor as we take a break. Back with Kevin ripping off some chops but Dean tells him to bring it. Ambrose grabs a headlock for a bit before Owens hits him in the face. The rebound lariat is broken up as Kevin shoves him to the floor, only to be sent hard into the barricade.

Dean hits a running clothesline off the apron but he gets caught in a hanging DDT on the way back in. We take another break and come back with Owens holding a chinlock. The backsplash misses and Dean gets two off a quick bulldog. A tornado DDT doesn’t work and Owens sends into the corner off a German suplex. Dean is ready for the Cannonball though and gets two off another tornado DDT.

Owens crotches him on top though and now the Cannonball gets two. The superkick sets up the rebound lariat to give Dean two more of his own. Ambrose briefly wins a slugout until Kevin drops him with a clothesline, only to be sent out the floor. Dean sends him over the table and then into the crowd for a double countout at 17:33.

They fight up to the stage and then to the technical area with Dean driving them both through a pile of tables to end the show. 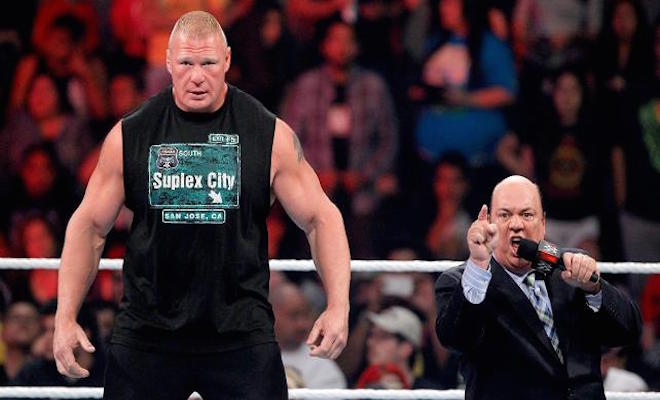 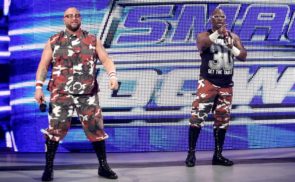 WWE Discussing a Potential Split of The Dudley Boyz