You can’t escape your past. In the vein of fans chanting ECW at almost anyone who ever worked for the promotion, Samoa Joe was greeted with TNA chants when he took the ring at a recent NXT show in Sydney, Australia. Upon hearing the chants, Joe gave the fans a thumbs down, reached towards his crotch for a second and made a motion symbolizing that the money was here in NXT.

Samoa Joe spent about ten years in TNA and won every title available in the promotion. While his time in TNA was successful, his later years weren’t his best as he won his only World Title there back in 2008, losing it in the same year. Since then he’s moved over to NXT and quickly became the first ever two time NXT Champion.

This isn’t going to be a big deal but that gesture might get Samoa Joe in some hot water. At the end of the day though, it’s fairly clear that Samoa Joe is going to be on the main roster sooner rather than later and something this simple isn’t going to run him off the rails. He’s a great character and an even better worker and those are qualities that aren’t going to be held down for long.

Do you think Samoa Joe should acknowledge the TNA chants? Was his reaction out of line? Let us know in the comments below. 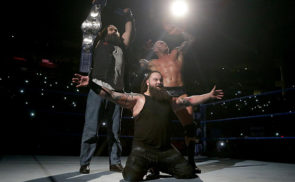 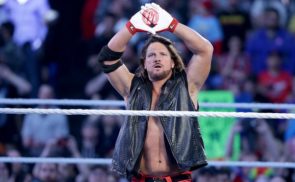 Here’s What AJ Styles’ Dream Match Would Be