Plans can change. There are a lot of wrestlers in WWE and only some of them can reach a high level of success. At the end of the day, there are only so many places for high level wrestlers in WWE. Vince McMahon has a big say in what happens to all of his wrestlers, which can be either good or bad. This time around though it’s good, and that was on display this week.

Debuting on Monday Night Raw back in April 2016, Apollo Crews is a case of someone who has all of the natural skills in the world but just wasn’t making it up to the next level. Maybe it was due to issues with charisma or not being able to speak well enough, but it wasn’t clicking for Crews. That was the case until Monday when he became United States Champion, and McMahon had something to do with the change.

According to Wrestling Observer Radio, McMahon has given Crews another chance after giving up on him at some point during his main roster run. Crews was called up the night after WrestleMania 32 and while he was given an initial push, it came and went rapidly, with Crews not gaining any significant momentum in four years. Crews is scheduled to defend his title against an opponent to be announced on next week’s Monday Night Raw.

I’d say he has potential. Check out some of what Crews can do:

Opinion: Crews is an interesting case as he has all of the physical attributes anyone could ever want but it hasn’t clicked yet. Maybe this is the break that he needs, but it can be a little bit difficult to believe that everything will be just fine all of a sudden. I’ve seen stranger things though and of course there is a chance that Crews becomes a big star. He certainly has the setup for it.

What do you expect from Crews? How long will he hold the titles? Let us know in the comments below. 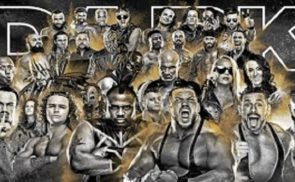