Welcome back Mahal. There are a lot of wrestlers in WWE’s history but only the elite can hold the World Titles. That is the highest level of prestige that a wrestler can achieve in the company and it means a lot to see someone achieve that goal. Some champions are more well received than others and now one of the more controversial champions of all time is going to be around more often.

Back in 2017, Jinder Mahal shocked the world by defeating Randy Orton for the WWE Championship. Mahal went on to hold the title for about six months, making him one of the most unlikely WWE Champions not just in recent memory, but perhaps ever. This didn’t exactly sit well with a lot of fans, and now those fans might be getting annoyed all over again.

According to Tom Colohue of the Drokick DiSKussion Podcast, Mahal is in for a big push now that he is back on Monday Night Raw. WWE recently signed a new television deal in India and Mahal will be pushed in an effort to appeal to the country’s huge fan base. Mahal returned to active competition on the April 27 Monday Night Raw after missing over ten months due to a knee injury.

Mahal does have some accomplishments to his name. Check out some of his better work, plus the full podcast:

Opinion: I know some fans aren’t going to be happy about this and I can understand why not. Mahal is not everyone’s taste and that isn’t going to change. However, WWE has a huge audience available to them and if Mahal is the wrestler who can appeal to them, WWE would be crazy not to push him. Maybe not all the way back to the top of the company, but a push does make sense.

What do you think of Mahal? Will he ever be World Champion again? Let us know in the comments below. 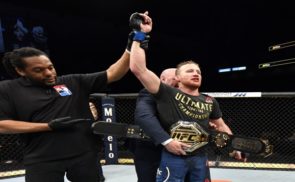