He kind of needs a break. Last year at WrestleMania 34, Daniel Bryan walked that aisle for the first time in three years as he was finally allowed to return to the ring. The return was an incredible moment and his return has been rather entertaining. After winning and losing the WWE Title again, Bryan is now one of half of the SmackDown Tag Team Champions. So why was everything switched in such a hurry?

According to Brad Shepard on the Oh. You Didn’t Know podcast, Bryan was moved from a singles role into a tag team to protect his health. Bryan has recently returned from an injury and the move was made to prevent further wear and tear on his body. By putting him in a team, Rowan can work more of the matches and allow Bryan to only come in when he needs to, thereby limiting the toll his body takes.

The new champs weren’t exactly happy. Check out their first comments with the titles: 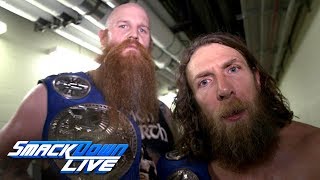 Opinion: This makes sense and it’s a good sign for Bryan’s overall health that he is able to be put in a place this important. WWE isn’t going to put their titles on someone who can barely wrestle a match so maybe Bryan really is healed up. Now hopefully he can make this a success as well, and that first promo suggests that it shouldn’t be that much of a worry. Bryan is talented, and WWE knows it, which is a great thing for everyone involved.

Do you like the Bryan and Rowan team? Who will take the titles from them? Let us know in the comments below.