The stars were out. There are a lot of talented wrestlers in the world and not all of them work for the biggest promotions. Independent wrestling has a lot of talent to offer the wrestling world, which is why it has become the place where so many wrestling companies find their new workers. One such wrestler was backstage at AEW Revolution and seems interested in joining the company.

Major League Wrestling is one of the better independent promotions in the wrestling world at the moment. The company has had a regular television show for nearly two years now, featuring some of the most underrated talent in the country, along with some established veterans. Some of those lesser known names have caught the eye of the bigger promotions and one was getting a closer look.

According to Bodyslam.net, Major League Wrestling star Mance Warner was backstage at Saturday’s AEW Revolution event. This marks the second time that Warner has reportedly been at the event. However, his current Major League Wrestling contract does not allow him to wrestle for AEW. There is no word on when his current contract expires, meaning it is unknown when he could leave.

You might need to get to know Warner. Check out some of his independent efforts:

Opinion: This could be some very good news as Warner is someone who is good enough to shine in a company like AEW. He’s charismatic and has that southern style of talking that you just can’t imitate. I’m not sure when he will show up in AEW but he is the kind of person who could be a lot of fun around there. Hopefully he gets to show up sooner rather than later, but it would be a shame to see Major League Wrestling take another hit like that.

What are you expecting from Warner? Will he be a success in AEW? Let us know in the comments below. 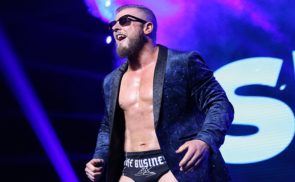